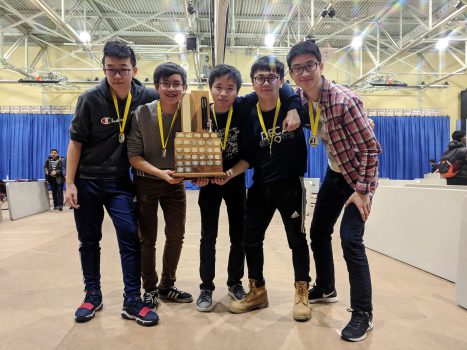 On 6 March 2019, from 8:00 am to 4:00 pm, the MGCI Chess Team participated in the Toronto Secondary School Chess League (TSSCL) City Finals at St. Michael’s College School. Schools from across Toronto were given the opportunity to participate in the tournament without a qualification process. Three of MGCI’s chess team groups performed exceptionally, with the junior team placing third and two senior teams winning first place and bringing back a trophy for the school.

Although there were many different teams and sections participating in the tournament, it was very well-organized, with rounds starting at appropriate times and a lunch break given to students.

Each team member played four rounds, with scores being recorded at the end of each round. One point was awarded for every win, a half point for every draw, and zero points for a loss. The team with the highest total score in their respective section won. Two impressive members of Senior B team, Hshmat Sahak and Harrison Chiu, won all four of their games. 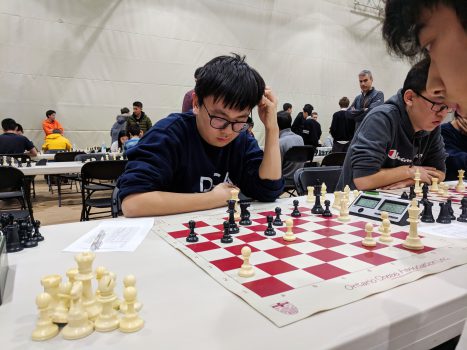 A Garneau chess team member competes in one of his rounds. Image: Justin Ye

The chess team meets every week at lunch to play chess for fun. Conner Lee, one of the winning senior team members, started going to Chess Club to meet other people and practice his chess skills in a light environment. He said, “I joined the chess team because I enjoy chess, and I also find that playing against real people is much more exciting than sitting in front of a computer, playing against the computer.” He added that, “Personally, I like chess for its intellectual stimulation. The thrill of competition and outplaying your opponents brings a natural excitement.”

MGCI Chess Team Captain Jason Cai was very proud of the effort the teams put in and their performance at the tournament. He said that, “The Senior A team [competed] against many other tough teams, like Victoria Park C.I., University of Toronto Schools (UTS), and Bayview S.S., but we managed to come out on top regardless. Our junior team, which had many students who have never played in a tournament before, showed great perseverance through a few tough rounds. I am excited for next year’s tournament to see what else our teams can do!”

The Reckoner would like to congratulate the three chess teams of MGCI on their great results: