The Orphan Sponsorship Club (OSC) consists of a group of compassionate teenagers who want to address world issues through action.  The Orphan Sponsorship club meets every Wednesday in Room 329 to help underprivileged children. Composed of approximately 21 members, and supervised by Ms. Balkissoon, they aim to help aid orphans in Canada and South Asia. However, their eventual goal is to aid orphans across the world.

The club was founded this year by Ayman Kazi, who wanted to make an impact in the lives of orphans and spread awareness. He was inspired by the University of Toronto’s orphan sponsorship program. He noticed how easy and cost effective it was so he decided to implement it at Garneau.

OSC meetings usually start off with a briefing from every board. The members all are extremely passionate about the cause, and this compassion ultimately results in a room full of discussion and ideas to help the club succeed.

Through their creative fundraisers and tactics to raise awareness, the club hopes to make a difference. Currently, one of their more prominent fundraising ideas is through unhealthy food sales: they plan to sell food at competitive prices to raise money for international orphan sponsorships. 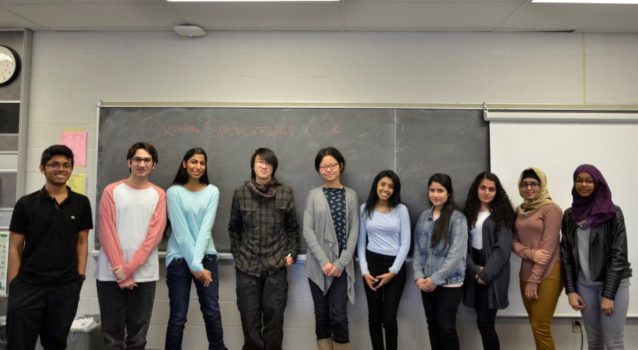 “We were unable to do an unhealthy food sale this month due to a miscommunication with SAC but we are positive on turning a profit in our next one.” Ayman said, “All profits go towards orphanages in Toronto and Dhaka. We also accept donations. We hope more students will involve themselves with us as it is mostly Grade 11 students right now.”

Club member Jonathan Ong said, “Ayman is very driven and passionate towards orphans and he often runs the show himself. I like working for the club.”

The OSC brings a new and fresh take on a problem that has existed for a while, and promotes youth initiative. This year, the club hopes to partner up with the Muslim Student Association, Social Justice and Equity and Save the Syrian Children club to work towards supporting orphans. They plan on involving the local community as well as initiating a joint project with UofT.

4 things matter most in Ruknoon’s life- Model UN, sleep, food and soccer (Arsenal and Toronto FC for life). A dedicated lover of hard rock and metal, he loves giving huge speeches about how great the genre is. He will watch any movie, TV show, read any book he finds as long as he finds it interesting for 5 minutes. He’s very shy of people but makes friends easily once he gets to know you. He has an unhealthy obsession with Russian Federation so don't go around speaking ill about Putin when he’s around unless you want to debate him.