MGCI clubs were busy and bustling in the Galleria at lunch on 2 October 2019 for the first Clubs Fair of the 2019-2020 school year.

The Clubs Fair is a promotional event for clubs to advertise to students and try to recruit new members. It also gives students the opportunity to explore a handful of the many diverse clubs Garneau has to offer and see which they would be interested in joining. Co-Clubs Coordinators Jessica Guo and Nuzhat Kanti spent two weeks planning the event with the Student Activity Council (SAC) and their staff advisors Mr. Alexander and Ms. Balkissoon. Jessica said that it is valuable for students to see what clubs exist and what they do so that they have an idea of what clubs to join or even potentially create come second semester.

With an impressive twenty-three clubs participating, some clubs had to share tables to accommodate everyone. The fair saw participation from popular and long-running MGCI clubs like the Muslim Student’s Association (MSA), Key Club, and EcoTeam, along with clubs brand new to Garneau like Kardia Christian Fellowship and 1UP.

Each participating club set up a table and prepared banners or signs to advertise their club. Many had printed flyers with key information about their clubs which they distributed to interested students.Club members also shared more information and answered questions. MSA handed out posters about Islamic Heritage Month that they had leftover from their movie screening event earlier in the week. They also had a large cardboard Instagram frame prop for students to pose and take pictures with. Rabia Nasri, MSA Secretary, said, “We want this year’s MSA to be really big. We want a lot of people to participate in our events, doesn’t matter if they’re Muslim or not.”

Some clubs planned engaging activities for students visiting their table to try out. Origami Club had paper available for a quick folding session and Art Council had printed out colouring pages for students to fill in or take home for a little stress-relieving fun.

MGCI Key Club also had a unique approach with a large banner showcasing all the awards they had won in the past, drawing attention to their table. They had also laid out various scrapbooks filled with photos from past events they had hosted or participated in. President Maggie Xu said that the club members present at the fair were all seasoned executive members and knew all about the events, so they were well prepared to answer questions and had a lot of information to share with students. 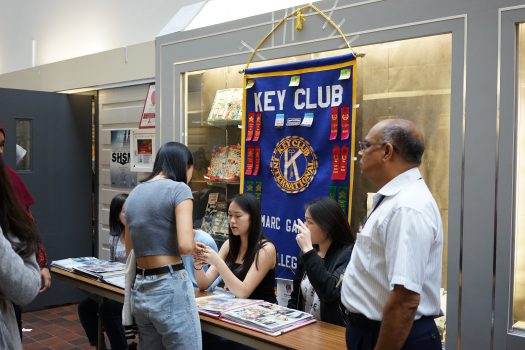 When asked why they decided to participate in the Clubs Fair, Art Council President Maimuna Akhter said, “We’re looking to get new members because we’re working on a mural with GSA and so we want as many people as possible to get involved. We’re also looking to recruit younger members because a lot of our club is Grade 11s and 12s.”

Nuzhat was pleased with both the turnout and execution of the event. “A lot of clubs signed up and they were successful with smooth setups.” She said the clubs were all very respectful and responsible, helping to clean up after the event. Another Clubs Fair is expected to take place next semester, shortly after second-semester clubs registration.

School Commits to Open Overlea Doors in the Mornings