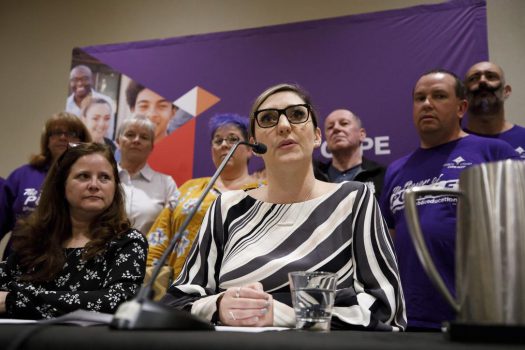 The CUPE bargaining committee. Photo courtesy of The Toronto Star

Just like any blockbuster movie where there is a behind-the-scenes crew ensuring the success of the actors, the success of students is determined by the hard work put in not only by their teachers but also the support staff. These staff members ensure that the needs of all students are met and that they have a safe place to learn. Although much of their work takes place behind the scenes, the absence of their duties was felt by students and staff all across Ontario as the Canadian Union of Public Employees (CUPE) began a work-to-rule campaign that almost led to a full strike.

The contract for the 55 000 education workers represented by CUPE expired on 31 August 2019. At this point, the Ford government had already made multiple changes to the education system of Ontario that had a negative impact on CUPE. The concerns expressed by CUPE members included the cuts made by the Conservative government which had resulted in job losses and fewer services for students, a reduction of full pay sick days from eleven to nine, and pay for one hundred and twenty short term disability leaves allowed was reduced from 90% to 60%. The government had also planned to reduce the number of benefits received by employees and the changing of language in the contract reduced job security, making it easier for the government to fire employees.

In order to pressure the government into addressing these issues, the union began a work-to-rule campaign on Monday, 30 September 30 to pressure negotiations. CUPE staff – including janitors, office staff, early childhood educators, and special education assistants – stopped working overtime along with performing a number of other duties that were not a requirement of their contract. Due to this campaign, students noticed a very unclean environment in schools as the caretakers were no longer cleaning the hallways, cafeteria, or gym, and stopped emptying garbage cans outside schools.

Once the unions realized that their work-to-rule was not allowing them to progress in their movement against the government’s changes, a full strike was announced. The strike was scheduled to start on Monday, 7 October and continue until the government and the union could come to an agreement. Following the union’s announcement, the TDSB and a number of other Ontario school boards declared that if a deal was not reached and a strike began, schools would be closed for all students. With a large number of staff who provide essential services on strike, there would be potential health risks such as lead in drinking water if the pipes were not flushed and accumulation of garbage without janitors. Furthermore, special needs students would have lack of support without special education assistants who provide individual help. An email regarding the TDSB’s decision was sent out to students and parents on Friday, 4 October 2019.

The negotiations between the government and CUPE continued over the weekend while students and staff anticipated the results, which were eventually announced at 9:00 pm on Sunday, 6 October. Following this announcement, the TDSB  posted on their website and twitter feed that all schools would remain open and students were expected to attend as usual. An agreement was reached between the union and the government, and the strike had been averted. The agreements included a fund of twenty million dollars to partially reverse the cuts made by the Conservative government, a one percent wage increase over the next four years, and no changes to sick leave concessions.

“I am extremely happy [with the results of the negotiations],” said Ms. Gagaropolous, a member of the office staff and CUPE representative for MGCI. “I think that social media does not portray that though. People don’t know that this is  what we were fighting for. If you look on social media, we’re portrayed as greedy; that we want higher wages, more benefits, more sick days. But that’s not what we were fighting for. We were united in fighting for the cuts to be reversed, for the cuts to be stopped. That’s why this was such a drastic strike; we went from work-to-rule, to announcing a strike, to TDSB announcing they were shutting down schools in a matter of days; because they want to show that they support us.”

A number of parents had been concerned about what to do regarding childcare if the strike was in effect and schools had been canceled as many parents have young children and jobs of their own. Teachers and students had also been worried that the cancellation of school for an indefinite period of time would have negative effects on learning. The resolved tension between the union and the government proved to be beneficial for most as CUPE staff were able to negotiate for a better working experience and students were able to continue their learning in a safe environment.