Friends for a Lifetime

She skipped down the sidewalk, swinging her arms wildly to the sides as her mother scrambled to catch up to her.

“Lucy, honey, slow down … Lucy, stop, come here!” said her mother, exasperated by her daughter’s enthusiasm and propensity to disregard her in public.

“Oh, mom, you just have to walk faster!”

With that statement, Lucy, heedless of her mother’s call, turned the corner and broke out into a run.

Still in sight of her mother but far enough to not hear her, Lucy came to a stop, smiled, and giggled.

The park was positively lit up with the squeals and shrieks of little girls, the yells of young boys, and the chatter of their smiling and watchful parents. The swings groaned and creaked as kids soared to the sky and the loud stomps of tiny feet echoed as kids ran around, wild and free. The world blurred around her, as streaks of blue, pink, and yellow enveloped her in a blanket of hues.

Lucy giggled again, her eyes wide with awe as she surveyed the scene.

In the next second, however, a tiny pout replaced her wide smile as she saw the crowded swings and slides for what they symbolized – no space for her. Dejected and disappointed, her bottom lip began to quiver and her eyes filled, before she noticed the empty sandbox.

Not one to dwell on the sights that made her unhappy, she cheerfully skipped away to the isolated sandbox just as her mother had caught up to her.

There, she played for the next half-hour, quite alone and yet quite fulfilled in her enjoyment. Soon after, a boy of about six years of age came up and sat on the side opposite from her.

Oblivious to his presence, Lucy continued building sandcastles, humming joyfully and singing contentedly until her creative masterpiece of stacked sand was knocked down unceremoniously.

She looked up, her icy blue eyes alight with anger and frustration as the little boy began to giggle. More than a little annoyed, she got up and placed her tiny fists on her hips. In the next minute, she decided to retaliate by flinging a tiny handful of sand at him, which landed in his jet black hair, distinguishable like sprinkles on ice cream.

“Jeremy, say sorry to the young girl right now. You should not have done that!” exclaimed an athletic and tall brunette, her large doe eyes and straight nose similar enough to Jeremy’s to be identified as his mother.

“And you, Lucy! What have I taught you about sharing? And you’re throwing sand now? Apologize right now!” said Lucy’s mother, who had finally managed to weave her way through the throng of kids to her young daughter.

As Lucy and Jeremy looked at their mothers, both of whose faces were red with vexation and hair blowing wildly in the air, they were overcome with their amusement. As Jeremy tried to stifle an escaped giggle, Lucy began to laugh openly, until both were bent over, straining to contain themselves. The sand that had been gathered in their hands was released, forgotten as it slowly sunk to the ground.

“And I’m Jeremy,” said the young boy shyly as his mother gently nudged him forward.

What could have turned into a serious fight involving sand and screams was the start of a beautiful friendship, though neither knew at the moment.

As Lucy stepped out of her car, tired and exhausted from a long drive, a gentle and peaceful smile overtook her previously serious expression.

I have been away for too long, she thought, as she breathed in the familiar musky scent that surrounded her neighbourhood. Her eyes slowly scanned the pristine houses, glittering as they espied the familiar large sculpture outside the Millers’ home. She distinctly heard the bark of the Johnsons’ German shepherd, and saw the birds chirp on the rooftop of her own home.

She was about to walk towards her home when her eyes were caught by the sight of the one place she had happily spent most of her childhood in. Without hesitation, she began to move swiftly towards the currently vacated park, her breath hitched with excitement.

As she neared the sandbox, she was disappointed by the view of a perfectly royal sandcastle, no person in sight. She was just about to head home,  head bowed, when she was halted by the voice of her truest and oldest friend.

“You’ve been gone for too long, Luce.”

The Spirit of Winter 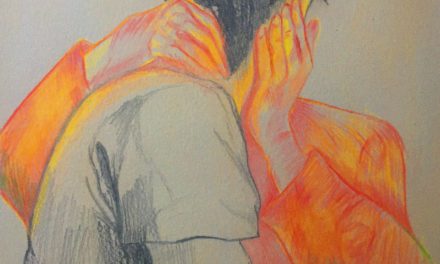