MGCI EcoTeam held Eco Spirit Week from 16 April to 20 April to promote environmental friendliness within Garneau. Each day of the week had a theme with activities promoting environmentally conscious choices and was advertised through social media and various posters hung all around the school. The week was kicked off with Moderation Monday, where EcoTeam encouraged students to turn off all unneeded lights, monitors, and electronics. On Tupperware Tuesday, students could go to the cafeteria at lunch with their litterless lunches to earn house points.

Wilderness Wednesday gave students a chance to participate in a guided tour of Garneau’s greenhouse. Students met at the greenhouse at 12:20 pm and Ms. Gunn, the green industries teacher, showed students the many plants of the greenhouse and spoke about their characteristics and origins. Among the plants were many long-time residents of the greenhouse such as germaniums, palms, and cacti. Recently, Ms. Gunn has also been growing edible plants, such as cucumbers, tomatoes, potatoes, and various herbs such as lemongrass, citrosa, rosemary, and thyme. She spoke about what makes mint an invasive species and told stories about the inch plant and how it got its name. Hshmat Sahak, a Grade 11 student who went on the tour, said, “I came because my friends asked and it seemed nice. I’ve only been here once and it was nice to discover what kind of species existed in the environment.” 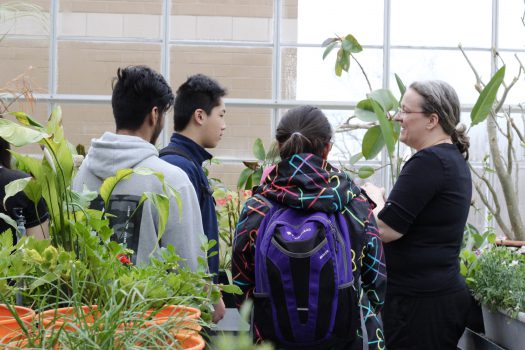 On Tap Water Thursday, students had the opportunity to compare bottled water and tap water in a blind water taste test. Located in the galleria, small cups containing different types of water were set up on a table. Students were invited to sample each type of water and try to guess which was which. The tap water was noted to have a slight mineral flavour, while the bottled water tasted like the inside of a plastic water bottle. 70% of students said they preferred the tap water while 15% said the two types tasted the same. The event also shined a spotlight on the water refill station in the galleria. The station is a two-in-one drinking fountain and refill station constructed with antimicrobial metal that was completed in the beginning of the last school year. Along with the taste test, a short explanation of the fountain was given. Those who participated in this event were also awarded house points. At the end of the week, the yellow house earned the most points, followed by the blue house, and then the red and green houses.

Due to extensive snowmelt and other events, Fix-up Friday, the seasonal cleaning of the back field that was originally planned for 19 April, was moved to a later date. This event is also to be held in collaboration with two other clubs, Me to We and Key Club. Students will meet at Room 227 and EcoTeam will provide gloves and bags to sort trash into garbage and recycling. Participants will be given volunteer hours for their efforts.

Eco Spirit Week raised awareness of the many small acts people can do to protect the environment. “These are often everyday things that don’t take much effort—like switching to tap water, turning off unneeded electronics, and avoiding packaging,” commented Jasmine Zhu, an executive of EcoTeam. “Every action counts, so our aim is to raise awareness about some main types of environmental issues and show how easy it is to help alleviate them.”

MGCI at the HSJAs: A Force To Be Reckoned With

Meeting the Clubs of MGCI