Throat singing, Kahoot!, and a traditional Sikh meal — Garneau’s annual Grade 11 interfaith conference was anything but ordinary this year. Contrary to previous years when MGCI organized its own conference, this year students attended a global conference—the Parliament of the World’s Religions—on 6 November 2018 at the Metro Toronto Convention Centre.

The interfaith conference explored how understanding and cooperation between people of different beliefs is crucial for creating change. Different seminars were held in halls around the Convention Centre; the one Garneau students attended was dedicated to high schoolers.

Garneau student Edith Nyamekye was invited to recite the Aboriginal Land Acknowledgement prior to the start of speeches. Keynote speaker and Rhodes Scholar Eboo Patel then kickstarted the conference. Eboo is the founder and president of Interfaith Youth Core, a nonprofit organization that promotes interfaith cooperation. He has also served on President Obama’s Inaugural Faith Council and authored three books about faith. During his speech, he spoke about his experience being an American Muslim and trying to navigate his way through his religion, referring to Nelson Mandela, Martin Luther King Jr., and Mahatma Gandhi as proof of the fact that interfaith cooperation creates change. He urged students to “honor the holiness of diversity” and to take charge of the world, because “the world needs [them].”

Eboo’s speech was followed by speeches by Byron Tyler Coles and Taylor Gould, interfaith leaders who started their respective journeys by attending a camp organized by the Interfaith Youth Core. Both of them took their experience at the camp back to their own lives to promote interfaith cooperation. Also a believer in reconciling differences, Eiman Ali, the founder of Muslim Women For, was met with cheers as she walked on stage. As a Somali Muslim woman who grew up in North Carolina, she admits that she always felt like “the odd one out.” She realized early on that she didn’t want to inherit her parent’s faith, but instead wanted to earn it for herself. Today she now helps combat violent extremism in the Horn of Africa, and urges students to use their own experiences, like she did, to change the world. 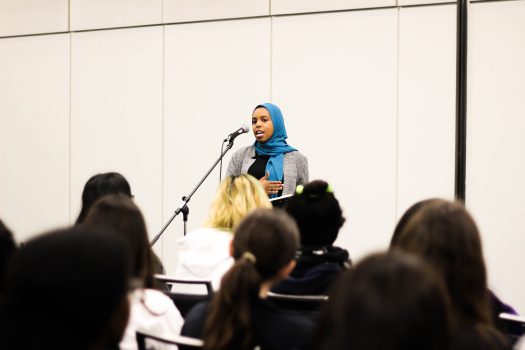 Sande Hart also hoped to set an example of being a changemaker. An ambassador for the Women and Girls Sector of the Charter for Compassion, she advocated the importance of compassion in solving the world’s problems.

Following Sande’s speech, Billie Schibler and Cynthia White, both elders in the First Nations community, shared words of wisdom and did a short throat singing performance. Billie, who is a Métis from Turtle Island, wanted students to respect and appreciate clean water, and to be aware that not everyone has the same access to it that they do.

Cynthia, who is of Onadaga lineage, wanted students to be proud of who they are and where they come from. She is now proud, but she said it took her a long time to get there. Delivering a similar message as others speakers, she told students to “stand shoulder to shoulder if we want to change the world.” 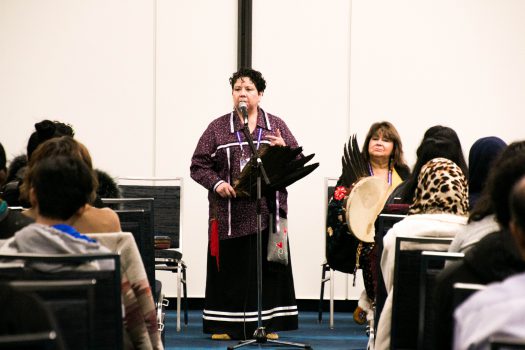 Cynthia White encourages students to be proud of who they are. Image: Laura Lu

The conference’s final presenters left the audience energized and ready to change the world. Tamara Tekpannie and Janice Oolayou, both twenty-two years old and part of the First Nations community in Nunavut, formed a throat-singing duo in 2016. At the conference, they performed five songs, including one which encouraged audience participation.

Following the conference, students had lunch in Sikh-style Langar. Langar is the term for a community kitchen in a Sikh Gurdwara where everyone is given a meal no matter social class, religion, ethnicity. Prior to entering the room, everyone was asked to remove their footwear, wear a head covering to show respect, and sit on the floor to eat, as is common in a Gurdwara. Students were served traditional rice, flatbread, gravy, lentils, a popular dessert called barfi, and tea.

During the remaining time, students were invited to explore the Interfaith Family Festival, which had interactive stations designed to teach people about various faiths and traditions from around the world. There were live First Nations performances and games such as Kahoot! which aimed to create an entertaining and educational environment.

The diversity of the event impressed students with important values and a lifelong knowledge and appreciation of different faiths. While each speech was unique, all were linked by a common thread of emphasizing the importance of appreciating and celebrating our differences, especially in the society we live in today.

Students saw the event as an educational opportunity. Edith Nyamekye said, “I realized that cultural barriers don’t prevent us from working together to better society.” They also appreciated the variety of faiths they were exposed to. Bisma Gondal’s favourite part of the conference, as for many others, was “the culture and diversity of the speakers.”

Principal Ms. Goldenberg brought students to the interfaith conference to “expand their horizons, learn something new, and work with each other,” given the diverse environment at MGCI. She started the conference three years ago with the hope that the Grade 11 students would “act on the knowledge they receive.” Although she would have changed certain organizational aspects of the conference in the future, she plans to continue it in upcoming years and use it to foster a sense of cooperation, awareness, and action in the Garneau community.

Interview on the Subject of Gay Rights