“It was a graveyard smash!” MGCI was spellbound by the spooky festivities organized by SAC for the annual Halloween Spirit Day, which took place on 31 October 2018 in the cafeteria at lunch.

SAC advertised its initiatives in the weeks prior to Halloween via posters and social media posts. Students were encouraged to dress up in costumes or wear black and orange clothing to earn house colour points.

Students and teachers who dressed up were able to show off their costumes in the Costume Fashion Show which happened in the cafeteria. Approximately fifteen teachers and students participated, with costumes including an octopus, a Twinkie, Harry Potter, and a knight. Six competitors assembled onstage for the subsequent costume contest and the audience cheered for whichever costume they liked best. Grade 10 student Syed Ahmadi won the competition with his unicorn costume and received a prize of one hundred mini chocolate bars. 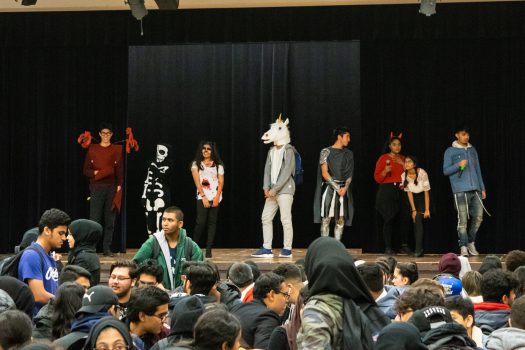 When asked why he decided to dress up, Grade 10 student Ryan Chang, who dressed as a lobster, said, “School spirit is important and it’s always good to contribute. Plus, it’s Halloween so might as well have fun!” However, not all the students who dressed up entered the competition. Mariel Pigao, a Grade 9 student dressed as a spooky mime, said she dressed up to celebrate both Halloween and her birthday, which fall on the same day. Mariel added that her favourite Halloween tradition is “telling scary stories at midnight!”

Among the other activities offered was the donut-eating competition, which costed fifty cents to enter. The winner of each round was awarded with yet another dose of sugar — a full-sized chocolate bar. Face-painting was also offered for fifty cents towards the back of the cafeteria. Grade 12 student and Special Events Convenor Zimman Yousuf was the designated artist. She said she painted whatever the students asked for, the most popular requests being skeletons and clown faces. 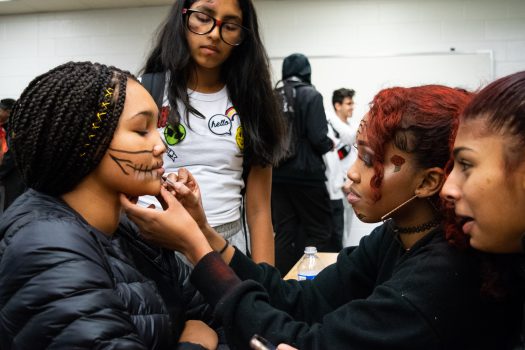 Grade 11 Student Elmirah Ahmad, who attended the costume contest and fashion show and participated in the donut-eating competition with her friends, said, “This year has been the best [Halloween Spirit Day] so far because I feel like more people dressed up and all the costumes were so diverse. It wasn’t just scary makeup; people actually wore all kinds of different, creative stuff.”

Spirit Day was not the only Halloween-themed event taking place at MGCI — the Gay-Straight Alliance club (GSA) hosted a screening of the classic Halloween film The Rocky Horror Picture Show on 30 October 2018 at lunch and afterschool to celebrate. Key Club also took part with their “Trick or Treat for UNICEF” initiative, collecting donations for UNICEF’s “Eliminate Project” which provides tetanus vaccines for mothers and children in need. They distributed orange donation boxes to each classroom in the school during the weeks leading up to Halloween and will be collecting them on 1 November.

The festivities organized by GSA, Key Club, and most notably SAC, Halloween at MGCI gave students an opportunity to show tons of school spirit. A spooktacular success!