Pump, pump, pump it up. Pump that Garneau spirit up! The livelihood of a school is shown in how well its students can show their spirit. That’s why, when Halloween spirit week came around from 28 October to 31 October, students came to school in costumes and makeup and participated in many events which the Student Activity Council (SAC) planned to show their spirit.

Monday, Meme Day, began with Rick Astley’s “Never Gonna Give You Up” playing on the announcements followed by Student Activity Council’s introduction of the jelly bean counting contest, where students could guess the number of jelly beans in a jar. The contest continued throughout the week, with a winner, Shahil Sarajideen, announced Friday morning winning the jar of jelly beans. At lunch, SAC displayed MGCI memes outside the SAC office for all to see.

Tuesday started with the announcement of 90’s Day. Students were encouraged to dress up in fashion trends from the 90s, though participation was low.  However, a Kahoot game took place in the cafeteria during lunch, based on 90s trivia which showed some level of success with around one hundred students participating.

Wednesday, Raptor’s Day, came with the introduction of a teachers versus students basketball game at lunch in the gym. With the unifying factor of sports in the mix, the bleachers were jam packed with cheering students as the battle between the teachers and students commenced at lunch. The match ended with the teachers victorious, leading 24 to 16.

Then came the big day — Halloween. Thursday began with students walking in to find caution tape all over the Galleria, ghosts, bats and spiders littering the walls, and cob-webs clustered around the school giving it a spooky feel. As the students trickled in, the Ghostbusters theme song could be heard on the announcements followed by SAC inviting students to their haunted house in the cafeteria. During lunch, nine participants competed in a costume competition. The winner, determined by the audience’s applause, received a box of one hundred mini chocolate bars. Simultaneously, the haunted house, which was free for students, was taking place behind the curtains on the stage. Students entered the haunted house through the stage door into the dimly lit passage, where people in masks would jump out at them. There was a bucket with imitation brains and a bodiless horse head constantly trailed their every step. Once they stepped out of the room and thought they were in the clear, SAC Vice President Ryan Chang, would jump out in his lobster costume and give one last good scare. Evan Woo, SAC Spirit Convenor, said, “The haunted house was definitely a big success. Huge inflatables, lots of scarings, three hundred to five hundred people. Lots of people screaming, overall was very, very positive.” 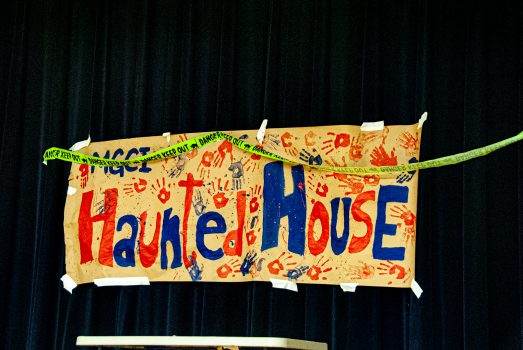 For many, Halloween spirit week was a way to have fun and relax. From the words of SAC President Nelson Lee: “This was the most successful Halloween Spirit Week shown in a long time. The line for the Haunted House was through the door, the gym was filled for our Raptors Day event, and the costumes this year were more extravagant than ever!”

Planning for a Prosperous Future

Fighting Cancer Together: Relay For Life

A Poet’s Ode to Women