In the Mood for Food

The Galleria was packed at lunch on 8 November 2018 as students flocked to the first Unhealthy Food Sale of the school year. A wide variety of food, including pop, cake, samosas, egg tarts, and banana muffins, was offered by different clubs. 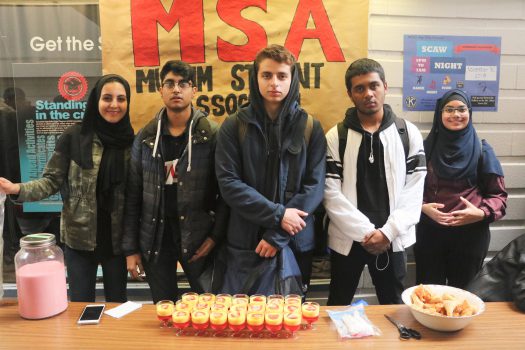 Invitations to participate in the Unhealthy Food Sale were sent out to every club several weeks before the event. Since limited spots were available, the participating clubs were chosen on a first-come, first-served basis. Last year, the Unhealthy Food Sale and the Clubs Fair were held in conjunction. Clubs Fair was instead held two weeks prior this year. The two events were separated because many clubs wanted just to raise money instead of gaining more members or vice-versa.

On average, clubs expect to make thirty dollars in profit. HOSA MGCI President Grace Xiong noted, “Sad as it may be, it’s unrealistic to expect a fortune of profits from the unhealthy food sales. That being said, they are still a good opportunity for clubs to raise funds through their own efforts, and an exciting event that displays the diversity and passion of clubs at MGCI.” Interestingly, MGCI Bridge Club earned over fifty dollars due to their strong sales of bubble tea.

SAC Clubs Convenor Jessica Guo, the organizer of the Unhealthy Food Sale, thought the event ran smoothly, claiming, “I’m pretty proud of how it went. A lot of people attended. I had a lot of help from other members of SAC, our staff advisors, of course caretaking and admin and all of the clubs. I tried to make sure we were all on the same page well before the sale and i think it paid off.”

The next Unhealthy Food Sale will be held before the holiday. Another is being planned for second semester.

Studying for Success with MGCI Tutors