After waiting two months, those who were consumed with a desire for cafeteria food can finally rejoice: students and teachers alike regained the chance to buy food at school again after Marc Garneau’s cafeteria reopened on 6 November 2018. 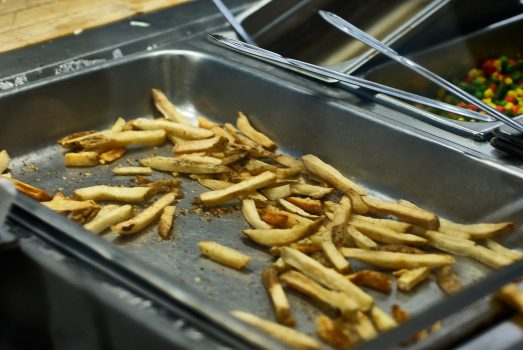 Fries were served on the first day of the reopening. Image: Jessica Xiong

“It’s more convenient now that the cafeteria is open, because I had to go out to McDonald’s to buy lunch if I didn’t bring it from home,” said Grade 10 student Jan Koky, who expressed his happiness at being able to buy food at school once again.

The cafeteria was closed near the end of the last school year when cafeteria workers realized that there was an issue in the plumbing system of the kitchen. A trap that filters wastewater from the kitchen was backing up and preventing water from passing through. The school immediately requested repairs, but repair workers were only able to come to the school in September. The trap is set in concrete beneath the kitchen floor, so construction, which included a replacement of all kitchen tiles, put a stop to all cafeteria functions until the repairs were completed.

“The kitchen still needs a lot of work,” one of the school’s cafeteria employees admitted. The school plans to replace most of the kitchen equipment, including the ovens, stove, and counters, later this year. This will be the first cafeteria renovation in about six years.The objective is to install new dishwashers for the reusable plates the school hopes to replace paper plates with, in an attempt to be more eco-friendly.

Another eco-friendly initiative being taken by MGCI is the Farm to Cafeteria initiative. With a grant from the Farm to Cafeteria program, fresh produce will be delivered to the school to create sustainable and healthy meals for students that will be served about once a week. “A small portion of the produce will even come from what is grown in MGCI’s own garden,” said cooking Teacher Ms. Gunn. “The preparation of these healthy meals would be done by students at the school,” she added. 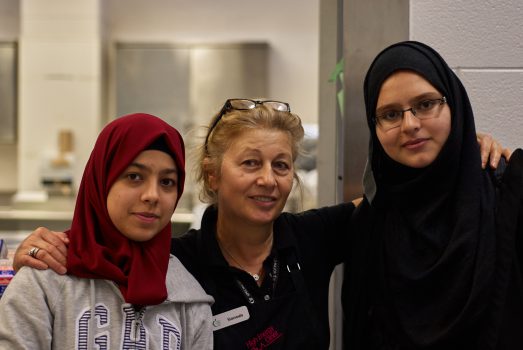 A cafeteria worker (centre) with students who will be on the student team that plans to run the cafeteria in the upcoming year. Image: Jessica Xiong

For now, however, the cafeteria is operating as usual, although some of the prices have increased from last year. This is because fuel and shipping costs are on the rise. In addition, many subsidies that once existed for different kinds of produce have been taken away, making it much more expensive to buy.

Despite a rise in food costs, the cafeteria’s menu remains the same as last year’s. The most popular item is still the six-dollar “Energizer Meal”, which is the main meal that is cooked fresh daily.

Another indulgence missed by students while the cafeteria was closed was the morning snack program. It was also affected by the delays as there was no access to the kitchen.

The snack program started at Marc Garneau in 2009 when staff started to notice that many students were unable to focus in class due to a lack of nutrition. Students were not always able to eat breakfast for a multitude of reasons. Some students’ families couldn’t afford it while others’ parents didn’t pay much attention to breakfast. The snack program was established in hopes of giving students the nourishment they needed to be able to concentrate and perform well in school.

The snack program is currently funded by the Toronto Foundation for Student Success (TFSS), which provides about 205 000 meals every day to students across Toronto, as well as by donations from parents. Last year, the school had thought about charging every student two dollars per month for the program, but eventually decided against it to keep the program accessible. Similarly, there is a lunch program at the school that provides free lunches every day to students with financial struggles. There are about eighteen students enrolled in the program so far.

This year, the school is trying a new system for the snack program. Instead of having individual bins for each first period class, snack bins will be placed in front of stairwells on every Tuesday and Thursday morning, so students can take what they want on their way into class. This is an eco-friendly initiative that will require fewer plastic bins and garbage bags, which were previously put into each classroom’s snack bin to avoid food waste in classrooms. The fare is the same as previous years: clementines, apples, bananas, yogurt, cheese strings, vegan muffins, and cookies.

Students are excited to once again have morning snacks and cafeteria lunches. Although plans for a renovated servery in the works, for now students at MGCI can enjoy being well-fed.