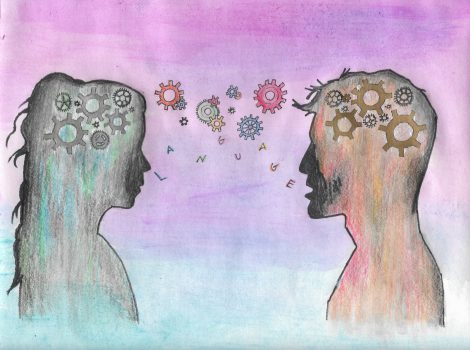 The way we as humans communicate is fluid. Language remains influenced by all other constructs of the universe, and it has been forever. It must adapt as everything else develops. In time, we will not speak the same way. The English language will grow and it will contract and it will writhe with life as its maturation continues. Many things will change.

We will need new words. Words for the things that aren’t yet existent, or prominent, or comprehensible. Consider:

A word for the thoughts that come to you, seeking refuge from some unspeakable demon of metaphysical proportions, only to realize that the cavity in your skull is no suitable hideout; we are unworthy. And so, just as uneasy and hopeful as it arrived, it flits away to another’s brain where it should wish to find a home. It leaves instead a numbed pain because you felt its presence for however short a time. For that moment, you had the answer to some question; perhaps one that would never be asked. But you felt something original happen upon you and there was one less thing in the world that you had never thought of. Now it is gone and you know nothing more than you once did―maybe the thought never even existed in the first place.

A word for the fear of the aforementioned occurrence. One that encapsulates that feeling of excitement, surprise, uncertainty, anxiety and loss―of being in temporary possession of a thought that does not exist to you outside the cradle of your cold neurons.

Maybe there is no need for such words. Maybe these concepts will be eradicated by our neurological evolution, our development of thinking skills so acute that only certain ideas can arrive at the gates of your soul’s window. No time allotted for judgement or reckoning; only the thought presenting itself to you in such a way that you cannot bar its entrance.

But what we will need is a word for the process of reaching to pick a flower from a field or garden, only for the stem to disintegrate into fine ash as the petals float away, discoloured. You begin to wonder whether the flower had any colour in the first place, or if it was all a product of your natural yearning for life. As we destroy our own planet, a word for such an experience will be necessary, considering the inaction of the politicians who traverse the catwalks and runways of capital with easy gracelessness.

And these will not just be words stored in some dark recess of the brain as novelties, the same way a friend will recite the clinical term for an obscure fear as some conglomerate of syllables with the suffix “-phobia’ from some book they read. These are words meant to be in our daily vocabulary; ones that will register an exact and characteristic mental response, because the necessity for such a word to exist in common use will be so compelling.

Or consider: a reality nearer to the opposite side of the spectrum, in which the populace decides that the esoterica of meticulously crafted, multisyllabic words is useless in such a present (to us, the future). The public has become so desensitized to the sharpness of pointed words and the blunt force of a technical testimony that all comprehensible feeling or occurrence can and should be conveyed in a manner which entails the use of the shortest words available. No more convoluted sculptures of sentences, only what is and what is not.

Could this be a possible future?

If so, how far into the future would this lexical revolution take place?

Imagine the shape of a civil war, fueled by those desperate to reboot the English language. Who are the rebels? Who are the militants? Could it even be stated? Imagine:

We fight the war.

And we lose the war.

And we all talk like this and we all know what we mean when we do.

Sumedh Dhanvanthry is a Grade 12 student and the Editor in Chief of the Eleventh Guard. But you’ll need more than that... You ever seen moonlight in a black-and-white movie making everything look softer, quieter? You know how sometimes you’ll step out into a dusky evening and feel a thunderstorm coming? And how in the night, the ocean is at its warmest but you’re a little scared as you wade out into the dark? He’s sitting on the baked pavement, writing his poem in chalk on the road, knowing it’ll soon be trampled to oblivion.

Lord of the Dreams

A Review of Contagion