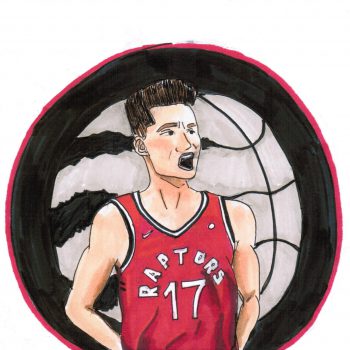 Friday, 10 February 2012: The stadium is electric. It’s a chilly night, and thousands are huddled together in Madison Square Garden, waiting for what’s to be the most noteworthy game of the season. The crowd is roaring, and fans are here from across the nation to see the most anticipated match of the year: Jeremy Lin vs. Kobe Bryant.

Tonight, Jeremy Lin drops a career-high 38 points against the Los Angeles Lakers. He breaks down their defense, driving again and again to the basket. Within hours, all of America will know his name, as well as the phenomenon that is “Linsanity”. “The yellow Mamba”, they call him. “Winsanity”, read the posters. The game finishes with 38 points and 7 assists for Lin, along with a shooting percentage of more than 57% [1]. But to millions of fans across the world, the statistics of the game are so much more than just numbers: Lin’s win is a symbol of hope, his story the inspiration of Chinese-Americans and underdogs everywhere.

Seven years later, “Linsanity” is merely a word thrown around as a joke by misanthropists who no longer seem to remember the value his story once held. Lin gets played slightly more than half the minutes he used to, falling short of only 11 points per game on average [2]. But we often forget why we once glorified this seemingly sub-par player.

Lin wasn’t supposed to get drafted into the National Basketball Association (NBA). In high school, he single-handedly carried his school team to state victory against national champions, yet remained undrafted by Tier 1 leagues. He didn’t get scholarships. He was kicked off of two NBA teams. He wasn’t supposed to score 38 points against Kobe Bryant; he wasn’t supposed to get played at all. Yet with all these odds stacked against him in the seemingly impossible chess game, Lin managed to gain piece after piece of our faith.

Despite the countless cynics and the pessimistic player reviews, I know the height of Lin’s career hasn’t passed yet: Just a few months ago, Jeremy Lin put up 20 points in thirty-five minutes against the Toronto Raptors, carrying the Hawks to a close win of 101-104. With Lin’s fireball energy on court, the lowly Hawks persevered and kept a close lead up until the remaining five minutes. On another occasion Lin put up 12 points in twenty-two minutes, ending the losing streak for his team again just as he had done seven years ago for the Knicks [3]. Most impressively, he popped back with 23 points in twenty-three minutes, making headlines once again [4].

Almost exactly seven years later his debut in 2012, Jeremy Lin’s back in the spotlight on 13 February 2019. Hours before the tip-off against the Washington Wizards, Lin’s flight has just landed in Toronto. From being an undrafted player, to Linsanity, and back to getting traded to five teams in five years, Lin has seemingly gone “full circle.” Millions of Torontonian fans are excited for this new start. On this new veteran team, Lin is still learning the ropes. He’s still meeting the players, familiarizing himself with new plays, and getting to know the team’s culture. Still, through all the pandemonium that comes with changing teams mid-season, Lin doesn’t look a single bit disoriented as he rounds up 8 points, 5 assists and 5 rebounds against the Wizards [5]. For a first game played after only hours of practice with a completely new team in a completely new city, even critics can’t argue his performance was substandard. It seems Lin’s enjoying his time in the Six, too: “Every time I come to Toronto, it’s always felt like a home game … It doesn’t matter what team I’ve played for,” he told the media [6].

Lin feels home, because, in a sense, he is home. Here in Toronto, Jeremy Lin’s playing for a city with one of the largest Asian fan bases in North America. Toronto fans are unlike any others, and we should give ourselves credit for that: we wait patiently in lines that stretch for hours, teeth shivering in the cold winters, and cramped together in the summer heat, all just for a chance to catch a glimpse of him outside of our television screens. Asians cheer for Lin regardless of the team, city, or court, because they want him as a person to succeed. For them, Lin’s identity as an Asian-American is representative of their culture, pride, and sacrifices made for future generations. To younger audiences, his underdog story empowers their ambition, proof that the underdogs can truly rise to the top. The impacts his story has on millions of Chinese-Americans and Canadians cannot be overstated.

Perhaps because he lacks the hard statistics to fill his résumé, it seems skeptics will always remain in doubt of whether the meaning behind Lin’s allegorical journey still holds true value. But this season, Lin has a chance at a comeback on the scoreboard, too. With Fred VanVleet temporarily off the court due to a thumb injury, Lin is willing and more than able to fill his shoes. His arrival in Toronto couldn’t have been at a better time, as he proves an invaluable alternate for Lowry. And with Lowry’s infamous inconsistencies during playoff season, perhaps even Lowry needs to watch his back.

Tina Ma is a writer for the Editorial Board at The Reckoner. She enjoys jumping rope, moving things around her room and calling it “cleaning", and looking through her friends’ Spotify playlists. She’s currently unable to wave at people who won’t wave back to her in the hallways since she’s attending virtual school, though she’s happy to report that her reply game has improved since Grade 10. In her spare time, she can be found editing videos for her new YouTube channel. She hopes that one day she’ll become internet famous and rich enough to buy a Maserati.

Op-Ed: Fare is Foul and Foul is Fair