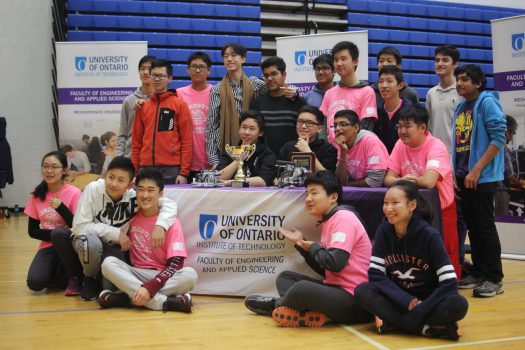 The University of Ontario Institute of Technology (UOIT) opened its doors for students from all across the province on 24 November, 2018 for the annual UoIT Sumobots King of the Hill competition in which teams would bring their robot to wrestle with other teams in a Sumo ring.

The club began preparing about a month before the competition. Each team designed a fully autonomous robot that would either engage or avoid other robots, stay within the black area of the arena, and gain points to win awards.  Points were awarded if robots performed certain tasks, such as passing over a small green ramp in the middle of the arena. Teams were disqualified from the round if their robot remained immobile for over twenty seconds or exited the white border of the arena. 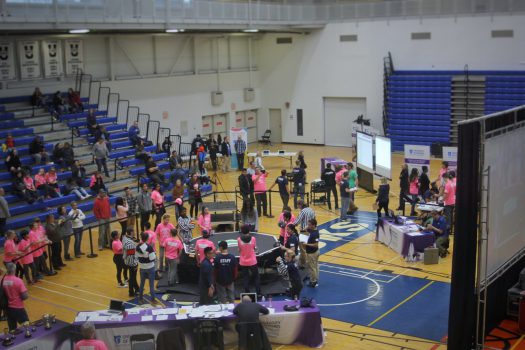 Two teams’ robots fight each other in the sumo arena. Image: Evan Woo

The day kicked off at 9 am in the Recreation and Wellness Centre with a two-hour testing session during which teams raced to test on the official arena, modify their code, and improve their robots. During this period, many robots engaged in head-to-head combat in an effort to push each other off the stage, while others spun to avoid conflicts. Whether the robot engaged or not with other robots depended on the team’s strategy. 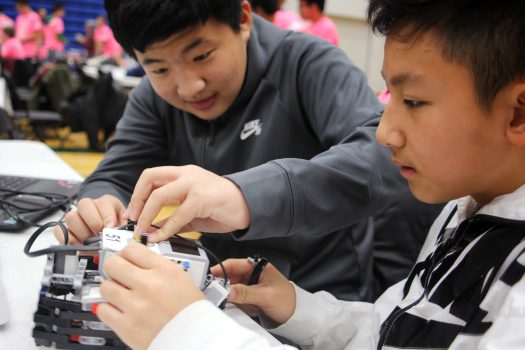 The testing period drew to a close at 11 am with a warm welcome from the University of Ontario. Schools were served lunch about fifteen minutes later as teams added finishing touches to their robots as quickly as possible before noon, when the competition would begin.

The preliminary round saw the five MGCI teams and one team from another school wrestling with each other on the black Sumo ring.

As the matches continued, teams raced back and forth to their tables, changing batteries, modifying code, and rebuilding their robots before the start of their next match.

Team 4 qualified for the semifinals, coming in fourth place with a total of 62.5 points. Team 1 finished eighteenth place, just two places below the minimum for semifinals. Team 5 came in twenty-eighth place with 42.1 points, and Team 2 scored 29.7 points finishing in forty-eighth place. Team 3 was one place below Team 2 with 29.1 points.

In the semifinals, Team 4 battled with seven other semifinalists in seven rounds, knocking out three competitors, avoiding heavy conflicts, and crossing the green ramp three times. The team swept all rounds with a total score of 26.5 points, which brought it to first place on the leaderboard.

In the finals, the team performed extraordinarily well, wrestling their way through competitors and knocking out several competitors as well as accumulating many points.

For the first time in the competition’s history,  two teams tied for first place, so Marc Garneau Collegiate Institute and St Joseph Secondary School both received trophies and were recognized as winners of 2018 UoIT Sumobots: King of the Hill Competition.

Akil Mikï Huang, a member of Team 4 and a MGCI Robotics Club executive, said, “From my experience in robotics club, both last year as a member and this year as an exec, I really do believe that UoIT 2018 was really the competition that solidified our esprit-du-corps as a club.”

Many members were thrilled with the results this year and hoped to achieve more in the future.

“I think that the club has grown rapidly in the past few years,” said Andrew Li, a senior club executive and member of MGCI Team 5. “This year’s results have undoubtedly exceeded everyone’s expectations, and I’m eager to see where the team will progress in the future.”

Rena is a Grade 11 News Writer for The Reckoner. Her hobbies include reading, sleeping, sleeping some more, listening to music, and stressing over tests. You can often find her procrastinating while studying.