MGCI Robotics: King of the Ring

On 16 November, 2019, students from all across Ontario gathered at the University of Ontario Institute of Technology (UOIT) to participate in the annual UOIT Sumobots: King of the Hill competition, in which autonomous robots compete against each other in an octagonal ring.

This year, MGCI’s Robotics Club sent five teams with around eight members each to the competition. Two Grade 9 teams were present, numbered as Team 21 and Team 43; two Grade 10 teams were present: Team 31 and Team 2; and one Grade 11 team was there as Team 4. They claimed the trophies for first place and third place, as well as the award for the Most Novel Design.

Members of the Robotics Club started working on their robots in early October. The robots implemented a variety of strategies that would help them gain points, which they could do by repeatedly travelling over a small hill in the middle of the ring, staying mobile in the ring until the end of each match, or knocking other robots out of the ring. Robots would be eliminated if they fell off the edge of the ring or if they were immobilized for more than 20 seconds.

The tournament took place in the Recreation and Wellness Centre and started at 9 am. Teams were allowed a two-hour session to fix and test their robots which ended at 11 am. The organizers from UOIT delivered a few welcoming remarks, which went on for fifteen minutes and transitioned into lunch. During lunch, many teams scrambled to add final touches to their robots before the official competition would begin. 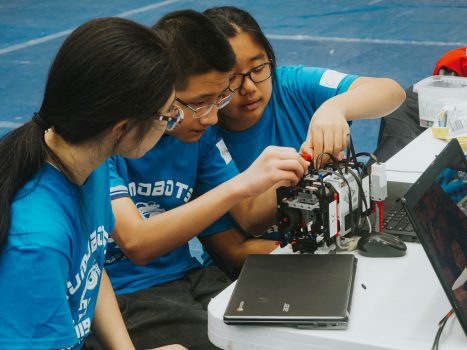 There were fifty-eight matches in the preliminary round. Each match lasted for two minutes and pitted eight robots against each other in the arena. Between rounds, many teams could be spotted rushing around the room, grabbing extra materials to improve their robots or revising code.

The quarter-finals had eight matches in total, still with eight teams wrestling with each other. Two teams from Marc Garneau qualified for the playoffs: Team 2 and Team 4. Both teams also made it past the semi-finals and into the finals.

The finals consisted of only four teams and one last match. During the final match, both of the Marc Garneau teams were outstanding. Team 4 went up the hill several times, collecting points, while Team 2 kept itself moving inside the ring for the entire match. Team 4 emerged in first place and was given the title “King of the Hill”, while Team 2 came in third place and also won the award for Most Novel Design.

“I couldn’t be more proud of MGCI Robotics’ performance this year,” said Andrew Li, the president of the Marc Garneau Robotics Club. “I could never have expected that we defend our championship, secure two other awards, and receive outstanding scores from all the teams. It’s honestly such a great honour to lead a student-run team that is so motivated and talented.”

In general, members of the club really enjoyed the competition. Many of them are already reflecting on the event and also looking forward to taking part in next year’s tournament.

Miranda Zhao, a member of Team 21, commented, “We were generally really supportive of our friends in the other teams. There was a lot of cheering for our robots. Towards the end of the day, someone made a sign to support our senior teams, who’d moved on to the finals. It was really fun to spend the day hanging out with my friends and bonding with my team. I gained a lot of experience and ideas from the overall environment that I think will be useful if I attend the competition again.”

The Reckoner would like to recognize the following students for their success:

Stephie Liu is an author for the News Board at The Reckoner. She is currently in Grade 11. Her hobbies include reading, playing Genshin Impact, and getting depressed while pondering her existence. She enjoys sleeping in chairs, sketching, binge-reading at two in the morning, jamming to electronic dance music, eating midnight snacks, and writing random short stories. You can usually find her stressing about her marks and assignments. She loves talking to others and making friends!