On the warm and sunny Friday of 13 May, the MGCI tennis team competed at the South Regional Tennis tournament. The tournament took place at the L’Amoreaux Tennis Courts, and players got to experience playing in the outdoor courts, indoor courts, and the tennis bubble. 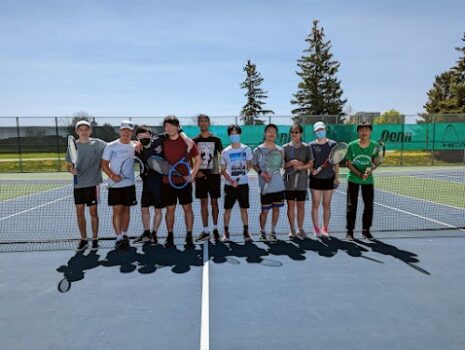 In preparation for the tournament, the team practiced at the Thorncliffe Park Tennis Club in the mornings before school, playing with and against one another to hone their skills. The team was led and coached by Ms. Yoganathan and Mr. Laughlin.

When Ms. Yoganathan, the teacher in charge of the tennis team, was asked about how it felt to coach the team, she said, “It was really nice to see sporting activities started up again after two years of no extracurricular activities! Training the team was a wonderful experience because as a coach you get to meet students outside of a classroom set up, and that interaction really allows you to know the students away from an academic environment. Also, coaching allows the convening teacher to keep on building the approach to training the skills needed for the sport. In the end, you learn a lot as a player and a coach.”

At the tournament, MGCI players played against students from Leaside High School, Northern Secondary School, Harbord Collegiate Institute, and more. Multiple teams from Garneau played in and beyond the semi-finals and medalled.

Alvin Young and Gloria Liu, one of the mixed doubles teams, played all the way to the finals against another mixed doubles team from Northern Secondary School. In an intense game that began with Northern in the lead, MGCI’s team pulled ahead later into the game, ultimately winning the finals match with a close but powerful victory and bringing back the gold medal in the high school mixed doubles division.

When asked how it felt to watch as the team played, Ms. Yoganathan said, “Sometimes I wonder if it is harder to watch or to play! There were moments when I could not watch because that one point could make a difference to their playing advantage, but I was always proud of how they handled intense situations.”

In regards to the experience at the tournament from the player’s perspective, Alvin Young said, “Practices were pretty fun, [the] tournament was pretty fun as well, though the finals were nerve-wracking and intense, and I’m pretty satisfied with the results – at least so far.” Gloria Liu said, “I liked practices, tournaments are nerve-wracking but still fun, [and] results are pretty good.”

On Friday, 20 May, Alvin and Gloria represented MGCI at the tennis city championships in the mixed doubles division. They played successfully all the way to the finals, playing against a team from Lawrence Park, and ended the tournament as TDSSAA silver medalists. They also qualified for OFSAA, the provincial level of competition. It will be a three-day tournament where they play against the best players of various cities across Ontario. This is also the first time a team from MGCI has qualified to play at the Ontario-wide tournament. Good luck to Alvin and Gloria at OFSAA!

Amy Jia is on the Editorial, Photography, and News boards in The Reckoner. This is her third year on The Reckoner now, but the only part of her that has changed is her height. However, she decided not to recycle her old biography just to spice things up. If you like reading, bubble tea, music, food, or squirrel pictures, then you know you definitely have something in common with her. She’s always happy to make new friends, so don’t be afraid to say hi or strike up a conversation!