On 3 May 2018, MGCI’s EcoTeam hosted its annual Trashion Show in the cafeteria at lunch. The show showcased fashionable outfits that were designed by students and created out of reusable materials. 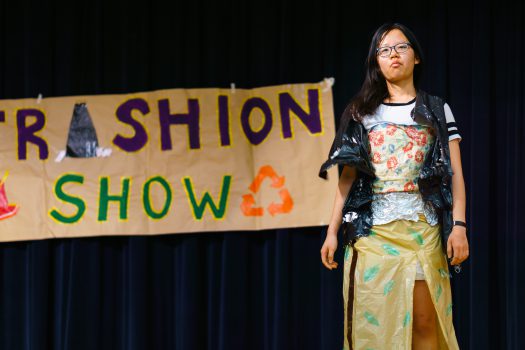 A student modelling one of the designs. Photo: Ava Pun

Trashion Show started in 2015 when the art department and EcoTeam decided to create a joint event combining environmental issues with art and design, and has since become an MGCI tradition. “The event is meant to raise awareness about the amount of waste that we produce and how the lifetimes of many everyday items can be prolonged with some ingenuity. Every year there’s bound to be at least one design that catches your eye, and makes people think about how many uses trash can have,” said EcoTeam executive Jasmine Zhu.

In the span of three weeks, students in Ms. Wilson’s art class teamed up in groups of three to create a total of six outfits. Designs ranged from a recycled fabric and garbage bag fairy to a tin foil and cardboard robot. Also featured were mermaid- and princess-themed dresses, along with several others. Grade 10 participant Bisma Gondal, whose group designed a gown, said, “It was hard at first, shaping the dress, but once we got the base done it was fun to decorate.” 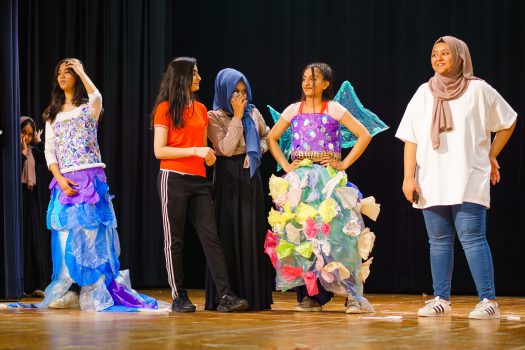 Designers standing with their models for judging. Photo: Ava Pun

The show was advertised through posters around the school and the morning announcements and was generally well-received. The vast majority of the audience applauded and cheered for the models, though some were disinterested in the event. In terms of improvement, Bisma suggested, “It might be better if it was held during Arts Night rather than at lunch because people there will be going for art and will appreciate it more.”

This year, Trashion Show featured a short presentation on “Fast Fashion,” a term describing the unsustainable production of clothing to keep up with trends, and the negative impacts of the clothing industry. The presentation concluded with the announcement of EcoTeam’s clothing drive. Students were encouraged to donate old clothes, shoes, bags, and towels in an effort to further promote sustainable clothing. The clothing drive was held until 14 May with collection bins located in the office.