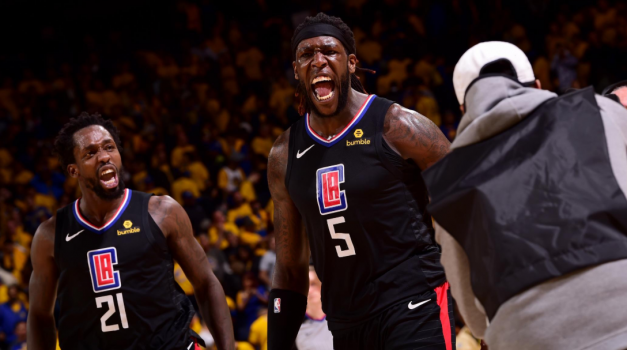 The Clippers celebrate after rallying from 31 down—the greatest comeback in NBA Playoffs history (Image courtesy of the NBA).

The Golden State remained competitive in a 135-131 loss to the Clippers despite losing star DeMarcus Cousins. Stephen Curry scored 29 points to go with 6 assists and 3 steals, and Kevin Durant poured in 21 points on just 8 shots, and added 5 rebounds, 5 assists, 3 steals, and a block. Kevin Looney, also for the Warriors, scored 19 points on 6 shots. The Clippers were led by Lou Williams’s 36 points and 11 assists. Danilo Gallinari added 24 points and Montrezl Harrell chipped in 25 points, 10 rebounds, and 5 assists.