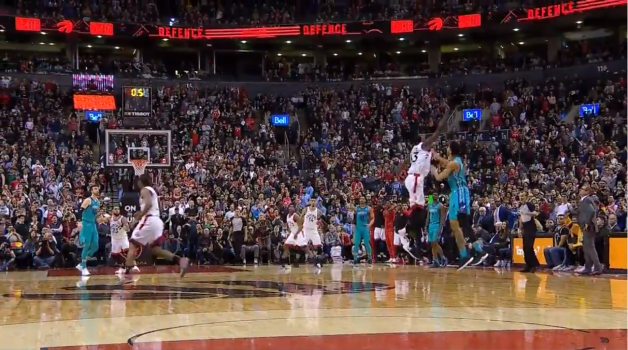 Jeremy Lamb (right, in blue) shoots a 50-foot buzzer beater over Paskal Siakam (in white) (Image courtesy of the NBA)

Game of the Night: Hornets vs. Raptors

The Raptors nearly rallied back from a 12 point deficit heading into the fourth, but Jeremy Lamb’s last-second heave from half-court dashed the Raptor’s hopes. We lost 115-114. The Raptors’ starters of today’s game performed admirably, outscoring the opposition handily to build a good lead heading into the second quarter, but the bench really lost the game tonight. OG, McCaw, Ibaka, and Jeremy Lin were outscored a combined 43 in 49 player minutes or so. The Klaw lead all scorers with his 28 points and added 9 rebounds. Siakam chipped in 23 points of his own, along with 7 boards and 5 assists. Kemba Walker led the way for the Hornets with 15 points, 8 rebounds, and 13 assists. Dwayne Bacon scored 20 points for the Hornets.

We were out-rebounded 39 to 35, and the Hornets had 14 offensive board to the Raptors’ 3, scoring 11 more second chance points.

With the help of Lou Williams’s game-high 29 points off the bench, the Clippers defeat the Knicks 124-113. Williams also recorded 7 assists. Montrezl Harell chipped in 24 points off the bench for the Clippers, and Danilo Gallinari added 26 points and 8 boards. DeAndre Jordan scored 20 points on 10 shots and had 13 rebounds, 4 assists, 2 blocks and 2 steals for the Knicks.

Giannis Antetokounmpo led all scorers with 26 points and added 10 rebounds and 7 assists to lead the Bucks past the Cavs. Kevin Love recorded 20 points and had 19 boards in a tough 127-105 loss for the Cavs.

Bojan Bogdanovic tallied a quiet 35 points on 13 for 16 shooting including 5 for 6 from three, while Domantas Sabonis had a 15 point 13 board double-double. Their stellar night ended with a scorching 36 point blowout win over the Nuggets, 124-88. Nikola Jokic scored 19 points and had 11 boards and 8 assists for the Nuggets.

Harden’s 28 points led both teams, and led the Rockets to the W. The Rockets won 113-90 in a 23 point blowout win. Chris Paul tallied 13 assists, and Clint Capela grabbed 17 boards, both for the Rockets. Anthony Davis recorded a 12 point 10 board double-double for the Pelicans.

Stephen Curry tallied 26 points and 9 rebounds on 5 for 10 shooting from beyond the arc, buoying the Warriors to a 121-114 victory in his return from injury. Klay Thompson added 24 points as the other half of the Splash Brothers, with the two going a combined 9 for 16 from three-point range. Blake Griffin had 24 points, 8 assists, and 6 rebounds for Detroit.

Lebron James posted a 29-11-11 triple-double in a close game between the Kings and the Lakers. The Lakers held on to come out on top with a 111-106 victory, improving to a 31-41 record. Kyle Kuzma added 29 points and JaVale McGee chipped in 17 points on 8 for 8 shooting to go with 14 rebounds. On the Kings’ side, second overall pick Marvin Bagley III scored 25 points and had 11 rebounds off the bench, leading his team in points and rebounds.