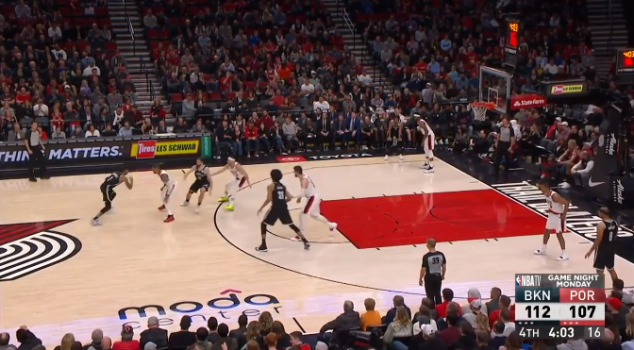 The Nets’ D’Angelo Russell (leftmost, in black) crosses over Damian Lillard (left, in white) (Image courtesy of the NBA)

Game of the Night: Nets vs. Trail Blazers

Tonight’s Nets vs. Blazers game didn’t feature C. J. McCollum, but the Trail Blazers still managed to walk away with a 148-144 victory over the Nets. In a wire-to-wire double-overtime game where no team led by more than 10 points at any time, the Nets’ D’Angelo Russell lead all scorers with 39 points and added 9 rebounds and 8 assists. He also led both teams in turnovers, with 6. The entire Trail Blazers team combined for just 3 turnovers, and got the better of the Nets, outscoring them 13-3 on points off turnovers.

Even without his regular back-court partner McCollum, Damian Lillard had 31 points to go with 12 assists and 6 rebounds. Jusuf Nurkic added 32 more points and 14 rebounds for the Blazers.

Though both teams had average shooting splits across the board, the Blazers took almost 20 more shots—and essentially won the game based off their volume of shooting.

A loss that the Blazers did suffer was their center, Jusuf Nurkic. Nurkic is out indefinitely with compound leg fractures from the Nets-Blazers game.

The Magic had a 21 blowout win over the 76ers on the back of All-Star Nikola Vučević’s 28 point 11 board night and now sit just half a game behind the Heat for the eight seed. Evan Fournier added in 24 points and 7 assists for the Magic, while 76er’s star Joel Embiid registered 20 points and 10 boards for another double-double. Ben Simmons did not play for the Sixers due to a stomach virus.

Three former Raptors had themselves big games for the Grizzlies. Bruno Caboclo had 24 points and 11 rebounds while shooting 57.1% from beyond the arc. Jonas Valanciunas continued his recent streak of strong play with another double-double, scoring 18 and grabbing 14 rebounds. Delon Wright chipped in 18 points and a career-high 13 assists for the Grizzlies. The Thunder’s Big Three of Paul George, Russell Westbrook, and Steven Adams shot a combined 17 for 56 from the field tonight, less than 31% percent. They scored a combined total of 48 points.

Despite Devin Booker’s herculean 59 point effort against the Utah Jazz, the Suns were blown out by 33 points in a 92-125 loss. Rudy Gobert had 27 points and 10 rebounds for the Jazz, while Joe Ingles had 14 points and 7 assists. Booker shot an efficient 56% including going 5 for 8 from three-point range, but the Suns did not have any other player register more than 9 points.