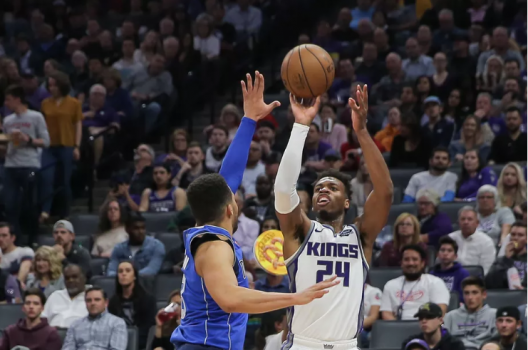 Game of the Night: Kings vs. Mavericks

The Kings edge out the Mavericks in a close 125-121 contest that featured yet another triple-double for the Mavericks’ Rookie of The Year candidate Luka Dončić. Dončić recorded 28 points, 12 rebounds, and 12 assists in a strong outing. Dwight Powell also featured prominently in the Mavs’ loss with 21 points and 13 rebounds. Sophomore point-guard De’Aaron Fox scored 23 points to go with 5 rebounds and 8 assists for the Kings.

The Hornets defeated the Spurs in an overtime thriller 125-116. Hornets’ All-Star Kemba Walker had a near triple double with 38 points, 9 rebounds, and 11 assists. Dwayne Bacon added 24 points for the Hornets. DeMar DeRozan poured in 30 points, 8 points, and 4 assists for the Spurs.

The Bucks completely took over halfway through the second quarter, and extended their lead with a strong 32-18 third quarter. The Rockets lose 108-94 shooting just 30% from three-point range. The Rockets’ Eric Gordon went 0 for 7 from the field, and missed 5 three pointers. James Harden and Chris Paul also shot poorly for the Rockets, combing to make just 16 of 44 shots. The Bucks were led by Giannis Antetokounmpo’s 19 points and 14 rebounds.

Spearheaded by Vučević’s dominant 24 points and 16 rebounds, the Magic defeat the Heat in a close 104-99 game.  Vučević also recorded 5 assists for the Magic. Dwayne Wade chipped in 22 points for the Heat to go with 7 rebounds, 7 assists and 3 steals.

This game saw 10 Raptors play 20+ minutes, with the 5 starters averaging less than 22 minutes each. Norman Powell led the Raptors to a 112-103 win with 20 points off the bench, while Kyle Lowry added 14 points and 6 assists in just 21 minutes. Shaquille Harrison had 15 points, 5 rebounds, and 5 assists for the Bulls.

The Clippers defeat the Timberwolves handily, 122-111. They led from opening tip through to the end of the fourth quarter off strong performances from Danilo Gallinari and Lou Williams. Gallinari scored 25 points to go with his 10 rebounds and 4 assists while Williams scored 20 points and added 4 rebounds and 7 assists. Karl-Anthony Towns scored 24 points and had 13 rebounds for the Timberwolves.

The Nuggets defeat the Pistons in a close 95-92 game. The Nuggets’ Jamal Murray scored 33 points on an impressive 63% from the field to go with his game-high 5 assists. Nikola Jokic scored 23 points and grabbed 15 rebounds for the Nuggets. Blake Griffin recorded a 29 point 15 board double-double for the Pistons.