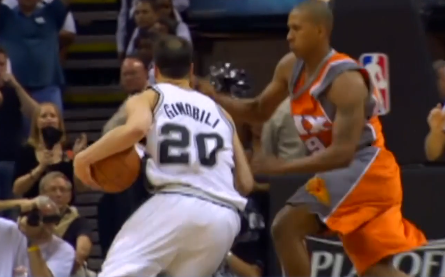 Game of the Night:  Cavaliers vs. Spurs

Despite being a close game, the highlight of the Cavs-Spurs game was not any play made by any player. After the Spurs beat the Cavs 116-110, Manu Ginóbili’s jersey was retired by the Spurs. Ginóbili was an integral part of a spurs dynasty that saw 4 championships. He also led the Argentinian team to a gold medal in the Olympics, defeated team USA in the semi-finals in 2008. In a 23-year career, Ginóbili has won the Euroleague championship title, multiple NBA titles, and an Olympic gold medal, just the second player in basketball history to do so. He retired last year with the highest ever winning percentage in NBA history, 72.1%. Ginobili ended his Spurs career ranked fifth in points (14,043) and rebounds (3,697), fourth in assists (4,001) and first in steals (1,392), while also placing fourth in career Box Plus/Minus and fifth in career Win Shares (106.4)

In a 115-98 victory over the Magic, Pistons’ star Andrew Drummond scored 18 boards and 18 rebounds. Wayne Ellington added 25 points on 7 for 13 shooting from 3-point range and Blake Griffin added 20 points, 10 rebounds, and 5 assists for the Pistons. Apart from Aaron Gordon’s 20 points game, the Magic shot just 37% from the field, and 26% from beyond the arc.

The Heat beat the Mavericks in a 105-99 comeback victory, thanks to a strong performance Goran Dragic. The Slovenian star scored 23 points to go with 12 rebounds and 11 assists. The other Slovenian, Luka Dončić, registered 19 points, 8 rebounds, and 7 assists for the Mavericks.

Off of breakout star Paskal Siakam’s 31 point 5 rebound 5 assist night, the Raptors improve to 53-23 on the season in a 117-92 thrashing over the New York Knicks. Knicks rookie Mitchell Robinson showed his worth with 19 points and 21 rebounds.

In a 121-118 victory over the Kings, Pelicans’ forward Julius Randle registered a game-high 34 points and 11 rebounds. De’Aaron Fox recorded 25 points and 12 assists for the Kings.