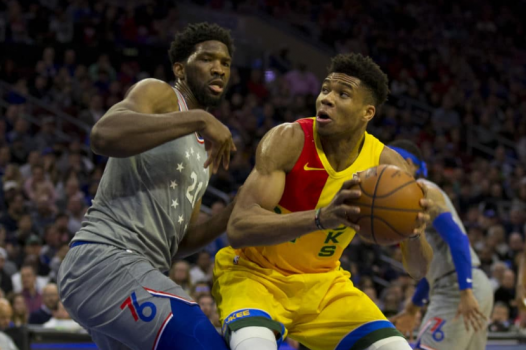 Embiid guards Giannis in the paint (Image courtesy of the NBA)

Game of the Night: Bucks vs. 76ers

Off of a MVP-worthy performance from Giannis Antetokounmpo, the Bucks clinch the best record in the NBA with three games to spare. Giannis led the Bucks in points scored with 45, rebounds with 13, assists with 6, and blocks with 5—all in just 35 minutes. Joel Embiid also huge night, but for the 76ers. He scored 34 points, 13 rebounds, and 13 assists. JJ Redick added 29 points for the 76ers. The Bucks closed the game with a 15-4 run that saw them overcome a 5-point deficit to win the game.

The Kings beat the Cavs 117-104 thanks to a strong performance from Buddy Hield. Hield scored 23 points on 56% shooting, including shooting 5 for 11 from 3-point range. De’Aaron fox added 16 points and 10 assists for the Kings, while Jordan Clarkson scored 22 points for the Cavaliers.

Despite the Splash Brothers Klay Thompson and Stephen Curry combining to shoot just 24% from the field (6 for 25), the Warriors defeated the Lakers 108-90. DeMarcus Cousins had a second straight 20+ point 10 rebound night, and Kevin Durant added 15 points, 6 rebounds, and 8 assists for the Warriors. Johnathon Williams scored 17 points to go with 13 rebounds off the bench for the Lakers.