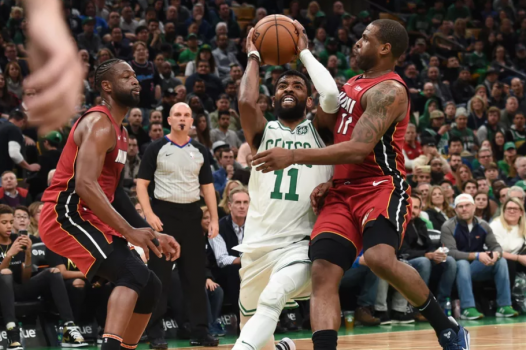 Kyrie Irving attempts a basket near the end of the game. (Image courtesy of the National Basketball Association)

Game of the Night: Heat vs. Celtics

The Celtics led from tip-off to the buzzer in a 110-105 victory over the Heat. Al Horford his first triple-double for the Celtics this season with 19 points, 11 rebounds, and 10 assists. Kyrie Irving added 25 points for the Celtics, while opposing point guard Goran Dragic scored 30 points to go with 5 assists and 5 steals.

Wayne Ellington scored 26 points in a 102-111 loss to the Pacers. Andre Drummond added 18 points and 17 rebounds for the Pistons, and Reggie Jackson scored 22 points to go with 6 rebounds and 4 assists. Myles Turner scored 17 points on 72% shooting and recorded 3 steals and 5 blocks for the Pacers.

Luke Kornet’s 24 points and 6 rebounds helped the Knicks secure a 113-105 victory over the Bulls. Mitchell Robinson scored 14 points on just 4 shots to go with 10 rebounds and 3 blocks for the Knicks. Robin Lopez scored a game-high 29 points and grabbed 7 rebounds for the Bulls.

Still missing McCollum and Nurkic, the Blazers needed the rest of the team to step up. Kanter scored 20 points and grabbed 11 rebounds, Rodney Hood scored 21 points, Evan Turner recorded a triple-double off the bench, and Seth Curry scored 19 points on 56% shooting from behind the arc. The Blazers beat the Timberwolves in a 132-122 victory.

Thanks to a strong 41-18 second quarter, the Mavericks dominated the 76ers 122-102. Justin Jackson scored 24 points on 7 for 11 shooting for the Mavs, and Salah Mejri scored 16 points and had 14 boards off the bench for the Mavs. 76ers JJ Redick and Tobias Harris each scored 25+ points.

Devin Booker scored 25 points to go with 13 assists to lead the Suns past the Cavaliers 122-113. Three Suns players had 10 or more rebounds, and Jamal Crawford added 19 points and 5 assists for the Suns. Rookie Cavalier Collin Sexton had 21 points.