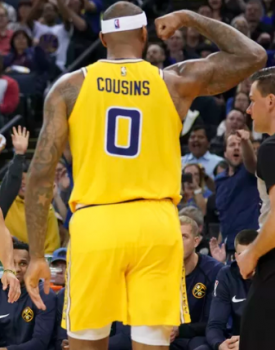 Game of the Night: Warriors vs. Nuggets

On the back of a historic 20/20/20 night from Russell Westbrook, the Thunder improve to 45-33 on the season. The Thunder beat the Lakers 119-103, and Westbrook’s 20 points, 20 rebounds, and 21 assists mark the first time since Wilt Chamberlain in 1968 that a player in the NBA has scored 20+ points, grabbed 20+ rebounds, and recorded 20+ assists. Westbrook dedicated his big night to Nipsey Hussle, the recently deceased rapper.

DeMar DeRozan led the Spurs to another victory with 29 points, 7 rebounds, and 7 assists on just 11 shots. Derrick White added 23 points for the Spurs, while Alex Len scored 21 points for the Hawks.