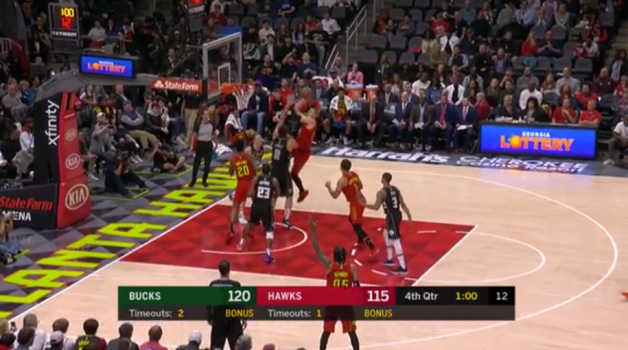 The Hawks attempt to score a basket late in the fourth quarter. (Image courtesy of the NBA)

Game of the Night: Bucks vs. Hawks

The Hawks defeat the top-seeded Bucks in an overtime thriller thanks to a last-second shot from Trae Young. Despite a rough shooting night, Young recorded 16 assists for the Hawks in a 136-135 victory. Justin Anderson, John Collins, and Alex Len all scored 23+ points for the Hawks, and Anderson and Collins added 12 rebounds apiece. The Bucks did not play their All-Stars Giannis Antetokounmpo and Kris Middleton. The two teams attempted an all-time NBA record of 116 combined threes.

Rajan Rondo scored 24 points and had 12 assists for the Lakers in a dominating 130-102 blowout win. JaVale McGee scored 23 points to go with 16 boards for the Lakers, while former-Laker Julius Randle scored 17 points for the Pelicans.

The Wizards beat the Nuggets 95-90 off a strong performance from Thomas Bryant. Bryant scored 20 points and grabbed 14 rebounds, whilst recording 3 blocks as well. Nikola Jokic scored a game-high 23 points, along with 14 rebounds and 4 assists for the Nuggets.

Stephen Curry’s 25 points, 5 rebounds, and 6 assists led the way for the Warriors to beat the Hornets 137-90. Quinn Cook added 21 points, 4 boards, and 4 assists for the Warriors off the bench. Klay Thompson scored 24 and Kevin Durant scored 11 points on perfect 5 for 5 shooting from the field.