Pink permeated throughout Marc Garneau as students and teachers wore pink shirts to fight against bullying and homophobia. This initiative, coordinated in the school by the Social Justice and Equity Committee (SJEC), was in celebration of The International Day of Pink, which took place on 11 April 2019.

The International Day of Pink was founded after a tragic incident that happened in 2007 at a high school in Nova Scotia, where a gay student was bullied by his peers for wearing a pink shirt to school. Two students spoke out against the bullying, but realized they could show their solidarity in a more concrete way. They encouraged students to wear pink to school, and succeeded a few days later, when almost all the students showed up dressed in pink.

At Marc Garneau, Day of Pink was celebrated on a smaller scale than it has in the past few years. In previous years, SJEC has distributed pins, visited classrooms to talk about the origins of the event, and created photo contests to encourage more people to dress in pink. This year, SJEC purchased fifty pink t-shirts with a sticker reading “MGCI Day of Pink” and sold them for $2 the day before the Day of Pink. SJEC purchased the shirts from the Student Activity Council’s (SAC) staff advisor, whose husband works in t-shirt production. They were purchased at an extremely low cost as profits were going towards a good cause. The shirts were in high demand, and sold out within twenty minutes, so some students who had wanted one did not get the chance to purchase one. Next year, Social Justice and Equity Convenor Edith Nyamekye plans to purchase more shirts to meet the demand. All money raised from this year’s sale will be donated to a charity, which has not yet been decided. 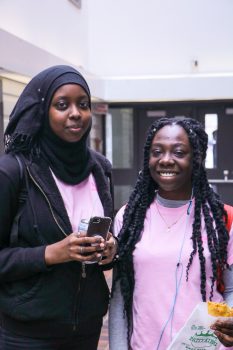 Aside from t-shirts, SJEC also organized a table in the Cafeteria during lunch, where students had the opportunity to sign their names on a poster to show their support against bullying and homophobia. Students who wore pink could also have their pictures taken to be posted on SAC’s Instagram page.

The Gender-Sexuality Alliance (GSA) had plans to purchase shirts and pins to distribute for free to students. Having recently received a $5 000 grant, they anticipated they would have the funds to purchase the necessary materials. However, according to GSA President Bridget Huh, the money from the grant was not added to the club’s account prior to the Day of Pink, so they were unable to follow through with their plans. However, Bridget emphasized the importance of the event: “The Day of Pink is so important not only as a show of solidarity against homophobia, transphobia and bullying, but also as a celebration of intersectionality—because discrimination can assume so many forms across different variables. This is about being open minded and accepting of everyone. To quote Kimberle Williams Crenshaw, ‘If we aren’t intersectional, some of us, the most vulnerable, are going to fall through the cracks’.”

Edith also advocated the importance of participating in celebrations like these, saying “The Day of Pink raises awareness against bullying and homophobia, and we really need that in our school. Students need to participate to spread the message, to show their support, and to understand mistakes that have been made in the past that shouldn’t be made again.” Zainab Omar, a grade 11 student who sported a pink t-shirt, agreed and said “I think we need to raise awareness as to why bullying and homophobia shouldn’t be tolerated. Especially in our school, these issues are not taken seriously, so I think giving background information to the students can help them understand and take action against these issues.” However, she thought students would benefit from a larger scale celebration in upcoming years. She would like to see “a school assembly to provide students with more information, more activities, and teaching people more about the origin of the celebration. Right now, many people don’t know what the event is about and why it is celebrated, and they just wear a pink shirt for the sake of it.”

It is clear from the goings-on at Garneau on the Day of Pink, that this event resonates with students and teachers alike. In the upcoming years, it will be exciting to see how the celebration can be expanded at the school, and maybe one day the entire school will come dressed in pink, like the Nova Scotian high schoolers did twelve years ago.

A Spirited March Break Send Off