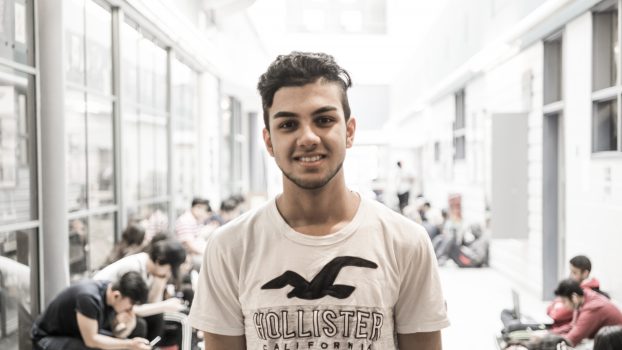 Last year the students of MGCI elected Areez Khaki as their SAC president for the 2018-2019 school year. A month into his presidency, Areez shares some thoughts on his new role.

Areez was announced as President on 14 May 2018 after weeks of campaigning alongside his two fellow candidates, Helen Chen and Nelson Lee. On finding out he had won, Areez said, “I was immensely happy. I felt like I had worked hard for what I wanted and it was rewarding to know that I put in the work and the results were there.” However, he immediately knew it would not be all fun and games, adding, “I also knew there would be hard work and it would come with a lot of responsibility and dedication to the job.”

Reflecting on his first month as President, Areez admits, “It’s been hectic, to be honest.” He says that the combined hardship of Grade 12 academics with the addition of some new staff members has proven to be a challenge in terms of coordinating events. Along with this, he mentioned that events and ideas that had been proposed much ahead of time were unable to manifest as early as he had hoped due to a variety of unforeseen changes within the school’s administration.

Areez’s frenzied yet ambitious start to presidency has proved fruitful. The month kicked off with the Grade 9 barbecue, which SAC assisted Student Services in hosting this year. Contrary to previous years, the barbecue incorporated engaging activities including frisbee and tug-of-war in an attempt to encourage student interaction. “Generally, the Grade 9s would get their food and drinks, then just sit around and be very passive – people would start leaving and those that stayed wouldn’t really do anything.” In terms of the activities livening up the notoriously lackluster event, Areez said, “It was immensely successful.”

To follow up on the success of the barbecue, the year’s first Spirit Week and Pep Rally were big hits. “We witnessed lots of excitement and participation, especially from the junior grades.” Areez shared that he strived to cater the events to the Grade 9s and 10s, shaping them into more welcoming events for the newer members of the school. “They were very enthusiastic about the activities, even organizing themselves into house colours for the pep rally, which was a new concept to them. I guess it permeated through to them and they adapted quickly. They took being part of a house colour as being part of Garneau culture.”

Looking forward, Areez shared that SAC is busy planning events for the upcoming months. In terms of the fast-approaching Halloween, Areez said, “We’re trying to do something unconventional this year, not the classic haunted house.” He is already well into organizing November’s Fall Fest, stating he wants it to also be suited towards the junior grades. “We’ve planned early because we want to make sure the events we plan at Garneau that are only done once in a while are deemed successful.”

When asked about the most prominent issue at MGCI, Areez responded that it was student isolation. “There are many specific groups of people whether it be TOPS, the regular stream, BSAP, or SHSM, and people feel isolated in the school’s environment. I feel student council helps fill that gap because it brings people together. In SAC, everyone knows they’re a part of MGCI.”

To conclude, Areez shared some final words of wisdom for MGCI students: “I believe that it is our experiences that define us and make us into unconventional people—as people who are different. Taking risks and being part of something bigger than yourself gives you a chance to have valuable experiences and see what you’re capable of. Take more risks and don’t worry about what other people think about you because at the end of the day, those risks will contribute to your success.”