On 27 September 2018, MGCI students participated in the annual Terry Fox Run. The event is hosted at schools across the nation to commemorate Terry Fox, a Canadian hero who ran five thousand seven hundred and thirty-three kilometres with a prosthetic leg to raise money for cancer research. Although Fox lost his life to the disease before making it across Canada, over $750 million has been raised for the cause since.

To fundraise for the campaign, donations were collected from first period classes in the days preceding the run. On average, the school raises around $1 000 each year. Although the collections have not yet been counted, Mr. Fox hopes to have raised at least one toonie per student this year, which would amount to around $4 000.

On the day of the run, each grade, starting with Grade 9 at 9:20 am, attended a presentation outlining the initiative. Students saw a short clip on Fox’s journey, after which MGCI gym teacher Mr. Fox briefly explained the “Toonie for Terry” campaign.

After the presentation, students walked or ran the two-kilometre route, with volunteers from SAC and the leadership class guiding them along. At various points, the volunteers took selfies with the teachers and students. They headed north on Don Mills Road, through ET Seton Park, and arrived back at school via Thorncliffe Drive. 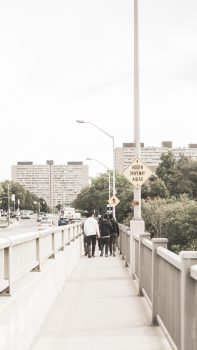 This year’s Terry Fox Run was organized by Mr. Fox and SAC. Vice-President Frank Hong said, “With the incredible organizing and hard work of Mr. Fox, the leadership class, and student council, this year’s MGCI Terry Fox Run was a great success. Everything flowed smoothly and the students were happy. In terms of next steps, we hope to expand our engagement efforts next year with more stickers and donations.”

Speaking about changes made to the event, Mr. Fox said, “There was a new video that was shown to students that explained the legacy of Terry Fox and his accomplishments really well. It was sent to us from the Terry Fox Foundation.”

This year is Canada’s 38th Terry Fox Run, and Mr. Fox’s 15th at the school. Explaining why he has been organizing the event for the past fifteen years, Mr. Fox said, “I am very passionate about Terry Fox and he is one of my heroes. More recently, my family has also been touched with cancer. The fundraising and awareness to support cancer research is just so important.”