Saying Hello to the Vape Store

The 180 Smoke Vape Store officially opened on 2 February 2017. Located at the Flemingdon Park Shopping Centre, the store’s cabinets are filled with selections of e-cigarettes and vaporizers. Since December 2016, the black and green sign on top of the store entrance has caught the attention of plaza visitors. While some may be wary about the store’s commodities, the 180 Smoke employees say their objective is simple: to promote vape as an alternative to smoking. 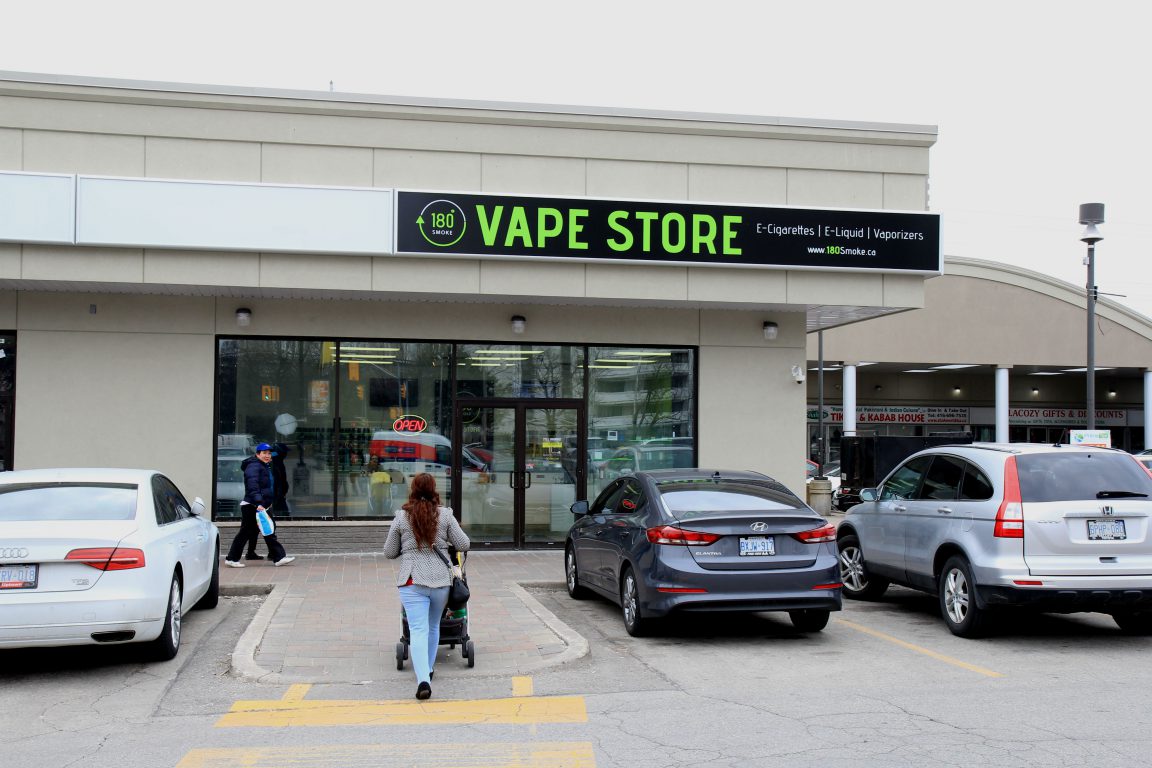 The 180 Smoke Vape Store is a Canadian-founded chain that sells domestically produced e-cigarettes, e-liquids, and vaporizers. The Flemingdon location is one of the twenty-seven 180 Smoke branches across Canada. It offers an alternative to smoking by selling e-cigarettes with various amounts of nicotine. As such, the company motto is “Turn Your Life 180.”

Vaping involves the vaporization of a liquid known as an “e-liquid” or “e-juice.” When inhaled, the liquid produces a sensation similar to that of regular smoking. The liquid’s vaporization does not involve any combustion, which is why 180 Smoke Vape Store says vapers have a lower risk of cancer than smokers. However, due to the presence of nicotine in the e-liquid, vaping is still an addictive activity and may be abused. Studies have yet to determine whether vaping is truly a safer alternative to regular smoking.

To purchase vape products, customers must be able to provide the store with valid identification proving that they are over the age of nineteen. In fact, employees at the 180 Smoke Vape Store are not allowed to speak to anyone under the age of nineteen about vape unless given consent from the individual’s parents. When asked about why the store was opened, one employee said that the store aims to sell to “people looking to quit smoking.” However, the store also sells to those who vape out of their own interest. The employee said that since its grand opening, the store has been “quite successful” and will likely remain open for the time being.

Another employee spoke about why he works at the 180 Smoke Vape Store. Having been a former smoker himself, he saw vape as healthier alternative. By working in a vape store, he was encouraged to further distance himself from smoking and pick up vaping instead.

The Flemingdon store is located near three schools: Grenoble Public School, Valley Park Middle School, and Marc Garneau Collegiate Institute. Because of the Vape Store’s legal responsibilities to sell only to consumers over nineteen years of age, it has had little effect on the school communities. Mr. Battaglia, the principal of Valley Park Middle School, said that he had not heard of the store until The Reckoner approached him for an interview. He also said that he has received no complaints from parents or school staff about the store. Similarly, Ms. Goldenberg said she had not heard of the vape store until The Reckoner contacted her. The administration of Grenoble Public School declined an interview.

Most students at Marc Garneau also did not know about the existence of the vape store, or exactly what vaping is, prior to being questioned. Out of those who knew, many did not support the opening of a vape store in the area. One individual said, “Although vaping is better than actual smoking, it’s still bad for you and isn’t really a real fix, more like a temporary solution. Theoretically, since you have to be nineteen to vape, students shouldn’t be affected but people could get fake IDs and illegally vape.”

Other students believe that the vape store is beneficial to the community, as it provides an alternative for those who have addictions to smoking and find it difficult to quit. When asked, Ali Bokhari said, “The recently opened vape store is probably a great contribution for those who have a habit of smoking. It helps those who have the urge to smoke constantly to smoke something of less harm.” Ali also said that he believes the age restriction protects underage students from vaping and is reassuring to parents.

As a vendor of the newest smoking alternative, 180 Smoke Vape Store offers smokers in the Flemingdon area a temporary solution in their fight to overcome tobacco addiction. While the e-liquid may have unknown and adverse side-effects, the age requirement to purchase vape products minimizes the store’s impact on the nearby schools. Instead, the issue at hand is whether the 180 Smoke Vape Store effectively rehabilitates its consumers by offering substances that are unhealthy, but to a potentially lesser degree than tobacco.

Learning the Do’s and Don’ts of Undergrad