Spirit Week kicked off the start of an eventful year of Student Activity Council (SAC) activities. From 16 to 20 September 2019, students and staff filled the halls with school spirit by wearing outfits to match the daily theme and participating in games in the cafeteria at lunch.

In the week prior to the event, SAC promoted Spirit Week using its social media, school announcements, and posters around the school to inform students about the prizes they could win. During the week, reminders were posted the night before each spirit day.

Students participating in the daily themes would earn points for their house colour and be entered into a raffle to win a $10 Tim Hortons gift card. A raffle winner was drawn at the end of each day. After each day, SAC posted the total house colour points, winner of the raffle, and pictures of participating students on its social media.

The week started with Pajama Monday where students were encouraged to wear their pajamas to school. During lunch, students played musical chairs in the cafeteria to win Tim Hortons gift cards as well. On Twin Tuesday, students wore matching outfits with their friends and a donut-eating competition took place at lunch. In addition, SAC ran a photo scavenger hunt, which asked students to take selfies at specific places in the school. The first three teams to finish won prizes. 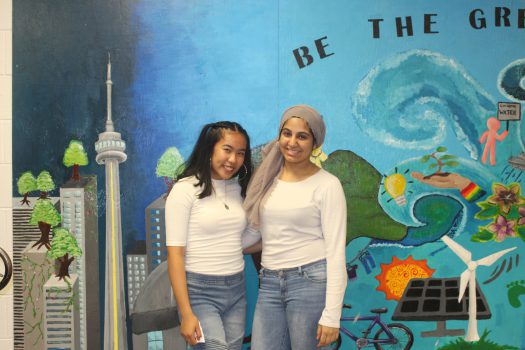 Wednesday was Sports Day and received the most participation from students; any student wearing a sports team jersey or hat was rewarded. At lunch, students competed in cup stacking and Suck it Up, a game where Smarties were sucked up from a plate using a straw and carried across the stage to another plate. Thursday was Disney and Pixar themed, and the Grade 9 Barbeque took place at lunch. Finally, Friday was House Colour Day, where students were encouraged to wear clothing that corresponded with their house colour to win points. Pep Rallies took place in the gymnasium during Period 2-5, with one grade attending each period.

At each Pep Rally, SAC played a video to introduce themselves before the activities began. Students from each house colour volunteered to take part in a three-point shooting contest, tug of war, and dodgeball game against teachers and SAC members. Points were awarded to the houses that won each game. Grade 12 student Arnab Liton, who attended the pep rally, said, “This Spirit Week has been great! I’ve had a lot of fun and I look forward to what SAC plans next.”

Spirit Convenor Evan Woo organized Spirit Week and said, “Spirit Week was a lot more organized this year and we successfully introduced the house colours to the students. Although there were a few problems with the microphones at the pep rally, everything else ran smoothly and I’m really happy with the results.” He plans to have the next Spirit Week around Halloween.