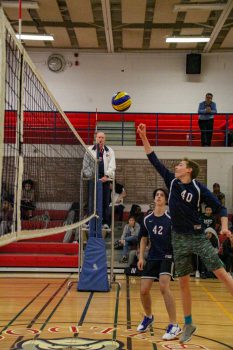 A player hits at the net. Photo: Evan Woo.

This year, the team was coached by Mr. Laughlin and Marlon, a community volunteer. It was comprised of twelve members from Grade 9 and Grade 10. Three of the twelve members had previous experience from being part of the team last year.

“Even though most of the team members were new this year, everyone integrated into the team well. There really weren’t any communication issues,” said Team Captain Nathan Latka. “We worked on creating stronger relationships between teammates, improving our teamwork, motivating each other, and staying positive.”

These efforts were well received by the team members. Grade 9 student Ryan Fei, who joined the team this year, commented, “Being on the junior boys volleyball team was a great experience overall, as I got to play a sport that I enjoyed as well as meet new people. Everyone on the team was outgoing and supporting, and we all got pumped up whenever big plays were made.”

Due to the growing possibility of a Canadian Union of Public Employees (CUPE) strike in the Toronto District School Board in early October, some of the games were delayed by a period of roughly two to three weeks. This allowed the team to improve by having several practices each week. For further improvement, Nathan commented that the practices could have been longer. “Understanding each other’s playing styles comes with time,” he said. “There could have been more consistency. We also definitely needed to improve team morale.”

The team made it into the semifinals and played against Leaside High School, winning the first set but losing the second and third sets. “The team’s performance was not as good as we could have played,” said Nathan. He commented that Leaside’s team began rapidly accumulating points at the start of the second set, lowering Marc Garneau’s team morale. “We started to get down on ourselves. I think we lost a lot of the energy we started with in the first set,” Nathan said. “I think we could have definitely won the match if we kept that energy and didn’t let the other team get in our heads.”

Despite the many setbacks the team faced throughout the season, members had positive comments about their experiences. Returning member Chen Peng said, “I enjoyed playing as a team and getting to really know and spend time with each other.”

Although the team didn’t make it to the finals this year, making it to the semifinals was a major milestone. “This year, we made it to playoffs and went far in tier 1,” said Grade 10 student Evan Woo. “We definitely had the potential to win in the cities, but I think part of what set us back was our mindset and mentality.”