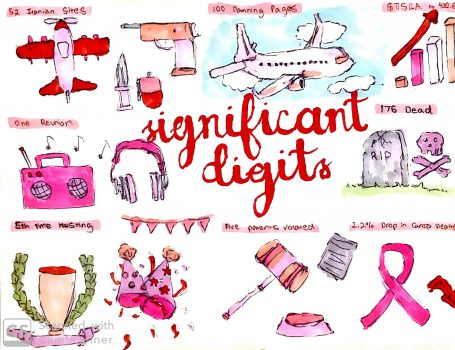 The United States killing the major Iranian general via airstrike became the genesis of an international crisis three days into 2020. At POTUS Donald Trump’s initiative, the US nearly pursued further aggressive retribution in a conflict Trump himself effectively started. In a three-part tweet, Trump declared that he would target 52 Iranian cultural sites (representing the 52 American hostages taken in 1979), if Iran attacked Americans or their interests. He then boasted about spending $2 trillion USD on military equipment for “the biggest and by far the BEST [military] in the world”, and reiterated that he would “hit [Iran] harder than they have ever been hit before”. Thankfully, senior officials in the administration have notified the President that this would in fact be a violation of international law, and this particular situation has since been de-escalated. If anything, the Pentagon being uncomfortable with a war crime is an auspicious sign for the new decade. [CNN][Xingming Xu]

The Boeing 737 Max has been grounded since March 2019, after two fatal crashes killing 346 people. Yesterday, Boeing released over 100 pages of internal messages between employees, revealing just how aware the company itself was of designing a flawed airliner. While some employees raised concern over safety issues, others boasted about bullying regulators to approve their flawed product. In either case, this document has shown that just about everyone knew about its issues. In April 2017, one employee told another “This plane is designed by clowns who are in turn supervised by monkeys.” In another exchange, employees agreed that they would not let their family fly on a 737 Max. In yet another message that year, Boeing’s chief technical pilot reassured their underlings that they’d fend off any regulators, who would force them to train pilots to fly the new model. “[These messages] do not reflect the company we are and need to be”, says Boeing. [CNBC][Xingming Xu]

Tesla stock briefly hit $420 per share Monday, December 22, 2019, after a stellar comeback from a three-year low of just under $177. It’s been a wild year for Elon Musk and his company: he’s suffered a 16% drop for $TSLA after a tweet, another 6.3% for smoking weed for the first time on video, and a spat with the SEC, with Musk getting sued for securities fraud. Fortunately, a profitable third and fourth quarter are responsible for its recent rebound. Musk himself was impressed, tweeting “Whoa … the stock is so high lol”. [CNBC][Xingming Xu]

Pharrell Williams and Chad Hugo — as the Neptunes — are responsible for many favourite 2000s radio hits. While in recent years, each has focused on separate projects, Chad has confirmed that he and Pharrell have been collaborating with popular artists, new and old. The Neptunes have spent recent studio sessions with big stars such as Miley Cyrus, JAY-Z, Lil Uzi Vert, Dua Lipa, and the Weeknd, as well as somewhat lesser-known artists such as Toronto’s very own Daniel Caesar, and Rex Orange County. Hopefully, their break can inspire a second burst of inspiration to produce beats as good as this. [Genius][Xingming Xu]

All 176 passengers aboard Ukrainian International Airlines Flight P5752 perished following its crash Wednesday morning at 6:18 AM local time, about 6 minutes after its delayed takeoff from Iran’s Imam Khomeini airport. Of the passengers aboard the 737-800 that crashed, 57 were Canadian citizens and 138 were ultimately bound for Canada. Although nothing has been confirmed about the reason for the crash, the fact that it occurred just hours after Iran launched a missile attack on U.S. bases has sparked heated global debate. An initial report made by Iranian officials attributed the cause to mechanical problems, but more recent reports from Canada and the U.S. point towards the plane having been shot down, possibly unintentionally, by an Iranian surface-to-air missile, claims which seem to be supported by a video taken of the crash. Crucial to the investigation are the two black (actually bright orange) boxes from the airplane which survived the crash and contain recordings of the plane’s flight data. It is unlikely that Iran has technology capable of accessing the black box information, but the country’s aviation authorities have already stated that they will not be looking to American-based Boeing. As of Friday, representatives from the U.S., Canada, and France are travelling to Tehran to attend meetings regarding the investigation into the crash, which will be led by Iran. [CBC, CBC][Janet Chen]

The 77th Golden Globe Awards: a night full of class, honouring the best in film and television, poking fun at politics and praising climate activism. Broadcasted from Beverly Hills, California, Ricky Gervais hosted the event for his 5th and final time, taking a laid back approach and to many people’s approval, lacked a filter.  While the Globes served a 100 percent plant based dinner to its guests to express their concerns for climate change, the ballroom was decorated with flowers flown in by jet from Ecuador and Italy. For films, “Once Upon a Time in Hollywood” took 3 Globes—the most of the evening—followed by the films “Joker,” “Rocketman” and “1917,” each with 2.  In addition, “Marriage Story” walked away with the most nominations of the evening, totalling 6. Finally, in television, “Chernobyl,” “Succession” and “Fleabag” each had 2 awards. For the full list of winners and nominations, see here. [The New York Times, Golden Globe Awards] [David Walji]

On Tuesday, January 7, Sonos sued Google in the Los Angeles Federal District Court and in front of the United States International Trade Commission, claiming the tech company violated five of Sonos’ patents. The goal for Sonos in this lawsuit was to seek financial damage, and to prohibit sales of Google speakers, laptops and smartphones in the US. This tech conflict started in 2013, when Sonos gave Google blueprints for its speakers under a partnership to combine the latter’s music service with the speakers. When the Google Home was released in 2016, Sonos discovered that the big company had used their technology to create the wireless assistant. Over the next three years, Sonos asked Google five times to at least license its technology, since the company was infringing on Sonos’ patents. When negotiations were not successful, Sonos took the issue to court. This is not the first time big tech companies have used smaller companies to their advantage; now, Sonos is speaking up for itself. [The New York Times][Cynthia Wang]

A new American Cancer Society report, released on Wednesday, January 8, showed the largest single-year drop in cancer mortality rates ever. From 2016 to 2017, the amount of overall cancer deaths dropped 2.2%. This is partly due to a decline in lung cancer deaths, which was caused by efforts to reduce smoking, innovations in  treatment, and earlier detection of cancer in patients. Overall, cancer rates have decreased by 29% since 1991, which is equivalent to 2.9 million less cancer deaths. However, the good news does not mean cancer is beaten. The American Cancer Society estimates that over 600,000 patients will die from the disease in 2020, and cancer is America’s second-leading cause of death, after heart disease. With continued efforts, though, the cancer survival rate will continue to rise in the coming years. [CNN][Cynthia Wang]