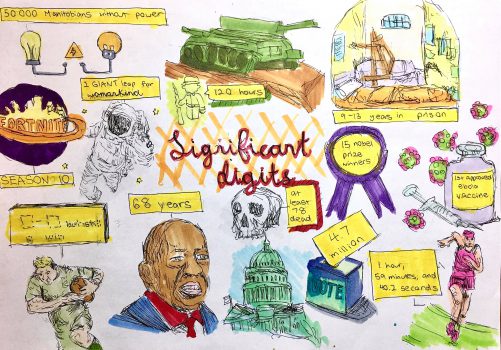 On October 10th, after a horrendous snowstorm and the province of Manitoba declaring a state of emergency, over 50 000 Manitoban households were without power according to Manitoba Hydro. Manitoba Premier Brian Pallister made a statement shortly after the storm subsided, saying the province is working as quickly as possible to bring back power.To date, power has been restored to almost all houses, but the province is not out of the woods yet. When all that snow melts, we can expect massive flooding. Winnipeg has already closed their floodgates and a number of Indigenous communities have prepared to evacuate with the help of the Red Cross.  You can see more about outages and alerts in the area here. [CBC][By David Walji]

It’s what we’ve all been waiting for: the end of Fortnite. Or, at least, the end of a season. On Sunday, October 13, season 10 of one of the world’s most played games ended with an explosion—literally. After the set end date was extended by a week, players were treated to an in-game destroyal of the entire map, and then nothing but a black hole. In the history of Fortnite, people were usually able to play the next season after the ending of the previous. In this case, however, the internet is left bewildered by the distinct nothingness left by season 10. Don’t worry though, gamers, because season 11 is expected to start October 17. [Fox][By Cynthia Wang]

The Nobel Prize winners of 2019 were announced October 7-14, and they certainly aren’t undeserved. William Kaelin, Peter Ratcliffe and Gregg Semenza, winners of the award for physiology or medicine, made notable contributions in how cells react to oxygen availability. James Peebles, discoverer of theories in physical cosmology, shared half the physics award with Michel Mayor and Didier Queloz, discoverers of exoplanet 51 Pegasi b, which orbits a sun-like star. John Goodenough, M. Stanley Whittingham and Akira Yoshino won the prize in chemistry for their work in developing lithium-ion batteries, while Austrian novelist Peter Handke claimed the Nobel Prize in literature. The peace prize went to Ethiopian Prime Minister Abiy Ahmed, for his work in solving border conflicts between Ethiopia and Eritrea. Finally, the economic sciences award was received by Abhijit Banerjee, Esther Duflo and Michael Kremer, for their efforts in reducing global poverty. Stay tuned for the award ceremony on December 10, where these accomplished individuals will receive their much earned Nobel Prizes. [Time][By Cynthia Wang]

Turkey has agreed to a five-day ceasefire of their ongoing offensive in Northern Syria, in order for Kurdish forces to withdraw from a Turkish-designated “safe zone” stretching 32 km deep into Syrian territory. The truce was announced following talks in Ankara that saw all major Turkish objectives be met, with the resulting agreement praised by current United States President Donald Trump as saving “millions of lives”. The Kurdish militias are officially considered terrorists by Turkey, and would be obliged to surrender their heavy weapons and cede their positions within the safe zone before retreating. The Kurdish position is yet unclear, though U.S. Vice President Mike Pence has claimed that the Kurdish-led SDF had agreed to the terms of the ceasefire. The SDF was not invited to the talks.[Reuters] [By Xingming Xu]

Nine leaders of the Catalan independence movement have been sentenced to between nine to thirteen years in prison for sedition in calling a banned independence referendum in 2017. The prison terms have outraged many Catalan citizens, as thousands of demonstrators marched in Barcelona squares. Pro-independence protestors have blocked streets and access to public transportation, as well as clash with police at Barcelona’s airport. Once again, the Spanish police have resorted to gas and beating protesters with batons to disperse the crowds. The former Catalan president, Carles Puigdemont, remains in Belgium after escaping extradition to be sentenced with his compatriots.[BBC][By Xingming Xu]

After being administered under emergency guidelines to over 270,000 people in Africa, the European Medicines Agency has finally recommended that the first Ebola vaccine be approved, declaring that licensing the vaccine is “an important step toward relieving the burden of this deadly disease”. Ebola, a viral disease that causes severe hemorrhagic fever, has been wreaking havoc in Congo since an epidemic was first declared last August. Since then, there have been 3,113 confirmed cases and over 2,150 deaths. The vaccine was originally developed in Canada and is now marketed as Ervebo; Merck, the company that produces the vaccine, has stated that its current priority is to receive approval of its Ervebo manufacturing site in Germany. The manufacturing site will produce a supply of Ervebo vaccines that will support “global public health preparedness”, according to Merck. Another vaccine is being developed by Johnson & Johnson for use in parts of the Congo where Ebola is not as active, but it has not been licensed yet.[CBC][By Janet Chen]

The casualty numbers continue to climb as Typhoon Hagibis, one of the deadliest typhoons to hit Japan in the last decade, rampages across Japan. Since it touched down southwest of Tokyo on Saturday, 520,000 households have lost power due to the flooding, and those located in severely-flooded areas could remain without electricity for another week. The typhoon is predicted to become one of Japan’s most costly natural disasters, with insured losses of about $9 billion USD according to investment firm Keefe, Bruyette, and Woods–but the consequences caused by Hagibis are more than just economic. The heavy rain from the typhoon caused 146 landslides, 128 ruptured levees, and 9,962 flooded houses. Fukushima Prefecture, which saw the highest number of casualties at 28 deaths, also saw 10 bags of irradiated soil from the 2011 Fukushima nuclear disaster washed 25 kilometres northeast to Tamura, where they drifted amongst the storm debris.[CNN, The Japan Times][By Janet Chen]

In the aftermath of the aforementioned typhoon, Japan received some much needed foreign aid from none other than Canada’s very own Rugby World Cup team. After the team was unable to play against Namibia, they took to the streets to help clean up parts of the city. With athletes from B.C. to the East Coast, they all picked up shovels, started digging the mud out of the streets and went into houses of the elderly to help them dry their belongings. In rugby, since cancelled matches are counted as ties, the official score of their match is 0 – 0, however the players are counting this one as a win (even though the administration isn’t) because of all the good work they were able to do. [CBC][By David Walji]

On October 12, Eliud Kipchoge became the first athlete to run a marathon in less than two hours, although it will not be considered a world record. Kipchoge, who is a Kenyan Olympic champion, took 1 hour, 59 minutes and 40.2 seconds to run 42.195 kilometres in Vienna, Austria at the INEOS 1:59 Challenge, an event set up for the attempt. The IAAF (International Association of Athletics Federations) will not ratify the time as a world record due to the abnormal assistance he was given. 36 pacemakers accompanied Kipchoge in alternating groups of 7, a timing car led him by projecting the ideal road position and running line with a laser beam, and he didn’t have to slow down for drinks,as they were handed to him by a cyclist. Kipchoge currently holds the official world record of 2:01:39 since last year when he ran a milestone marathon in Berlin. [Toronto Star][By Serena Poonawalla]

American politician and civil rights leader Elijah Cummings has died at the age of 68. Cummings was a Democratic member of the U.S. House of Representatives from Maryland’s 7th district since 1996 which included half of the city of Baltimore. Cummings was the chairman of the House Oversight and Reform Committee and led multiple investigations into Trump’s dealings with Russia and probes related to Trump’s family members serving in the White House. Earlier in the year, Trump assailed Cummings on Twitter and called Baltimore “a rodent infested mess” where “no humans would want to live”. Before Congress, Cummings served for 14 years in the Maryland House of Delegates, rising through the ranks to become the first African American to be named Speaker pro tempore. Cummings died early Thursday morning at Gilchrist Hospice Care due to complications from long standing health challenges,signing subpoenas till the very end. [Wall Street Journal][By Umar Yousafzai]

On October 18, Christina Koch and Jessica Meir made history when they floated out of the International Space Station to replace a faulty part of the power network. This was the world’s first all-female team of spacewalkers and the first time in decades where a woman has floated out without a male crewmate. The event went viral on social media, garnering much support from organizations including Girl Scouts. Watching from mission control, former spacewalker Tracy Caldwell Dyson expressed her pride for this milestone and hopes this becomes a regular occurence in the future. These women have become an inspiration for all females and truly shown that the sky is not the limit.[CBC][By Anirudh Goel]

Election day may be on the 21st of October, but an estimated 4.7 million Canadians have already cast their votes in advance—an increase of more than a million. These 4.7 million Canadians represent more than a sixth of the eligible voters and predict that this year, there may be an even higher voter turnout than the 2015 record-high election. Although most students of Marc Garneau aren’t able to vote, this indicates a more representative federal government for all. Personally, I’m glad to see the highest ever rates of young voters, though this may be crushing the Conservatives’ dreams of a Conservative majority government. [CBC][By Catherine Zheng]

A Spirited March Break Send Off