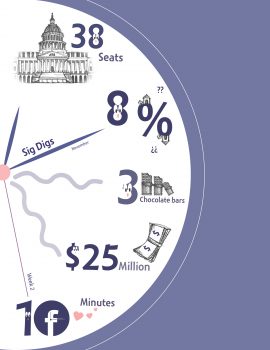 According to Fivethirtyeight, Democrats are projected to make a net gain of 38 seats in the House of Representatives. Voters, unsatisfied with the Trump administration, gave democrats a strong mandate in the lower house. Returns will likely be coming in throughout next week, so be ready for more updates!

Of Torontonians don’t know any of their neighbors, according to a recent study by the Toronto Foundation. Knowing your neighbors correlates with increased civic engagement and lower risk of alzheimer’s in old age. Me personally? The last time I spoke to my neighbors was the last time they tried to sue me.

Constable Vittorio Dominelli, or as he was described by the trial judge “a complete idiot”, was forced to resign from the force this week. He and Constable Jamie Young stole three cannabis infused chocolate bars during a raid in January, and proceeded to each consume one. After becoming severely intoxicated, they were forced to call for assistance, and brought in on several charges. Idiocy indeed.

Ontario is, as of this writing, the only province in Canada that has a lower minimum wage for students. In case you’re wondering just how much money you could be making, a 2017 report estimated the amount of lost wages at $25 Million a year. To put that in perspective, that’s enough money to buy the entire staff of The Reckoner a school lunch for every meal, every day of the year, until they die. Not that I’m asking…

Are you thinking about taking advantage of Facebook’s new online dating service? No need to worry about sending a risky text, because the company will now allow you to delete an unread message up to 10 minutes after it’s been sent, hopefully saving you a lot of explaining.