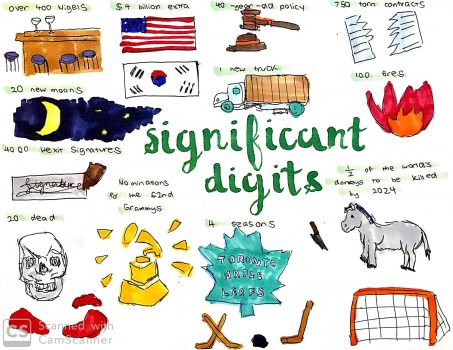 Nigel is an increasingly unpopular name in the UK.  When one curious Nigel found this out, he wanted to see the extent of the damage.  Nigel Smith, owner of the Fleece Inn near Worcestershire, decided to set up a Nigel Night.  A surprising 434 Nigels were able to attend, making this a world record for the gathering of Nigels—though no one is sure if anyone was counting to begin with.  Although the Nigels ranged in ages from 7 months to 80 years old, there were unfortunately no Nigellas (the female equivalent to Nigel). While the UK Office for National Statistics confirmed that no Nigels were born in 2016, 11 Nigels were born in 2017 and 8 in 2018, meaning that there is still hope for the community.  The most popular names in the UK in 2018 were Jack, Noah, Harry, George, and topping off the list with almost 5 400 newborns, was Oliver. [CBC] [By David Walji]

After 20 new moons were recently discovered around Saturn, this ringed planet now holds the record for the planet with the most moons in our solar system.  The Carnegie Institution for Science reported that Saturn’s now 82 moons breaks Jupiter’s old record of 79. These small orbiting rocks are around 5 kilometers in diameter, and while they were first spotted in 2004, their orbit was only very recently confirmed.  The fun part about discovering new celestial objects? Naming them. Of the 3 moons that travel with the rotation of the planet, 1 of the moons will be given a name from Norse mythology while the other 2 will join the Inuit group of moons and named off of Inuit mythology.  The other 17 are being left up to you to decide. If you have a suggestion as to what to name one of the moons, tweet them to @SaturnLunacy tagging #NameSaturnsMoons. [CBC] [By David Walji]

First things first, I would like to make it clear that I am not a history buff. That being said, let us take a brief look back at when separatism in the past in Canada. In history class, we learnt about Quebec wanting to separate. Considering how I can still visit Montreal without a passport, we all know how that worked out. So why, might you ask, is Alberta and Saskatchewan wanting to Wexit (or Western Exit) from Canada? For the same reason that anyone would want to leave a group and the same reason that the Bloc Quebecois party was formed—some Western Canadians are angry and they feel that they have been treated unfairly. I feel for them. We’ve all been in situations where we’ve been stuck working with people who don’t value our opinions as much as they do their own.  However, this build up of anger and thoughts of mistreatment does not give one the right to mistreat others. Wexit needs 2 500 signatures to become a full-fledged political party like the Bloc. However, they have allegedly signed up businesses on their petition without the proper permissions and been petitioning on said businesses’ property. After several weeks of waiting, Wexit finally took down the names of the businesses that complained from their sign up sheet and moved off their properties to the sidewalks. Nonetheless, Wexit has collected several hundreds of signatures and is looking to collect over 4 000 names in order to ensure the 2 500 quota is met. Will Wexit become the new Bloc? Or is Wexit just another phase? Alberta and Saskatchewan, please consider taking a page out of George Lucas’ book and ponder alternatives to separatism.  [CBC] [By David Walji]

Samoa has declared an emergency due to a measles outbreak, closing schools, banning children from public gatherings, and mandating the vaccination of every person as the death toll from the outbreak rises to 20 as of Friday. The country has been in the midst of an epidemic since three weeks ago, a problem only made worse by the low immunization rates on the island nation. In fact, immunization rates among Samoan infants have been falling since 2013, from over 70% to under 30% this year. This was partially caused by the Samoan government halting the immunization program for several months following the death of two infants last year due to a vaccine mishap. It’s no coincidence that Samoan children make up the majority of the 1,644 cases as of Friday, with 19 of the deaths being children under four years old. Samoan director general of health Leausa Take Naseri stated last week that because only around two-thirds of Samoans have been vaccinated, he expects that the epidemic will only get worse. [CBC, Al Jazeera] [By Janet Chen]

South Korea currently pays $1 billion to host US troops in its country. POTUS Trump now demands $5 billion. In another attempt to assert American “greatness” by bullying its allies, Trump has raised the price of South Korea’s military alliance with the United States by 400%. Despite his incessant whining about defense “free-riders”, South Korea provides the United States  with rent-free land for their military bases, and shoulders roughly half of the cost anyways. Whatever the reason for this decision, South Korean leaders have been left deeply confused by this sudden upcharge, and far less convinced of the US’s commitment to it as an ally. In retrospect, someone should’ve seen this coming based off Trump’s demand of a 300% increase in payment from Japan, as well. [CNN][Xingming Xu]

Or to be clear, the reversal of one, held by Democrats and Republicans alike. United States Secretary of State Mike Pompeo announced earlier this week that Washington no longer considers the Israeli settlements in the West Bank to violate international law. These settlements occupy Palestinian land, and their presence make it difficult to broker a peace between Israel and the Palestinians; the Israeli families living in them would have to be evicted. Palestinians are thus pushed into a dwindling territory, with dwindling options. Evidently, a move as controversial as this seems to be an attempt by the American and Israeli Right to shore up support amongst their fundamentalist, religious, conservative voter bases. After all, both POTUS Trump and Israeli PM Benjamin Netanyahu are fighting to maintain their grip on power. [Reuters][Xingming Xu]

Nominations for the 62nd Grammys

Announced on November 20, this year’s Grammy nominations deviate from what we might normally expect. Recording Academy sifted out bigger names in the top four award categories such as Taylor Swift and Beyonce to include newer artists such as Lizzo and Billie Eilish. This year, there is a total of 84 possible awards. Leading artists in the nominee lineup include Lizzo, with 8 nominations, and Lil Nas X and Billie Eilish, both with 6 nominations. Although fans are upset at some artists being left out, such as Taylor Swift’s album “Lover” being disregarded and BTS’ lack of nominations, a notable improvement includes an increase from five to eight nominees in the Best New Artist category. The 2020 Grammy awards ceremony is sure to be interesting, and is set to take place on January 26. [CBC][By Cynthia Wang]

On Thursday, November 21, Tesla CEO Elon Musk revealed their new electric truck model—the Cybertruck. The model looks like something straight out of a science fiction movie—trapezoid in shape, sleek and shiny. It’s made of a stainless steel alloy, and includes “unbreakable” metal windows, adjustable seat height, multiple storage spaces, and a self driving option. Set in its Design Studio in Hawthorne, California, the supposedly bulletproof pickup drove on stage. To prove its indestructibility, a metal ball was thrown at the “unbreakable” windows. Which then shattered. In the wake of the scandal Tesla stock plunged,costing Elon Musk 768M.  Price starts at $39,900, be sure to pick yours up in 2021![CNN,The Guardian][By Cynthia Wang and Adil Haider]

Shortly after his election last year, Premier Doug Ford tore up 750 renewable energy contracts. More specifically, he decommissioned an entire wind farm, telling the public that it would “save ratepayers $790 million dollars in taxes.” However, even now, there is little evidence or professional confirmation that this number holds and instead, this Tuesday, it was revealed that the decommissioning of the wind farm and windmills cost the residents of Ontario over $231 million, which the Progressive Conservatives hid in their government documents. However, it’s more than just the financial burden or the blatant ignorance of the environment, it’s the message the Ontario government has sent: that Ontarians don’t respect past contracts, that we don’t respect businesses, and that we don’t respect investors—the very people Doug Ford promised to attract. [Global News][Catherine Zheng]

Strong winds fueled more than 100 fires across Australia’s east coast. The numerous catastrophes claimed 4 lives, 1 million hectares of farmland and more than 300 homes. The fires also led to a thick haze forming over Sydney, rendering its air quality to be unsafe and at a hazardous level. More than 1300 firefighters worked on containing the fires and were successful, although more fires are expected due to the strong winds and high temperatures that have been predicted for the upcoming weeks. [CBC][Serena Poonawalla]

On November 20, the General Manager for the Toronto Maple Leafs, Brendan Shanahan announced that Mike Babcock was fired from his role as the head coach of the Toronto Maple Leafs with Sheldon Keefe taking his role. Keefe was in his fifth season as the head coach of the Toronto Marlies. The Leafs have been struggling this season with a six game losing streak at time of Babcock’s firing and having only two regulation wins in 16 games. Babcock had signed an eight year, $50 million contract in 2015. Since becoming head coach, Babcock brough Toronto to the playoffs for the past three seasons. However, the team has been unable to advance past the first round. Before the Leafs, Babcock spent 10 years with the Detroit Red Wings where he led the team to a Stanley Cup in 2008. The Leafs last won a Stanley Cup in 1967 and currently has a 51 season drought between championships, the longest in the NHL. [By Umar Yousafzai] [Global News]

Half of the world’s donkey population could be wiped out in the next 5 years to meet demands for a traditional chinese medicine. According to a report by the Donkey Sanctuary, to keep up with needs for the chinese medicine, ejiao, about 5 million donkey hides are required each year. The donkey hide is used to make gelatine, a key ingredient of ejiao, which can improve blood circulation and treat conditions like anaemia. A 44 million donkey population has seen great depreciation since 2007 in countries such as Brazil, Botswana and Kyrgyzstan. China has lost over 70% of its donkey population since 1992 and are turning to global imports to fill the demand. As donkeys are very slow to reproduce, donkey farming will take more than 20 years to replenish the levels needed. Also, donkeys are often mistreated and put through difficult traveling conditions in which about 20% die en route to their destination. Donkeys form a key part of many third world communities, which accounts for as many as 500 million people. With the booming skin trade active, alongside the lack of regulation where donkeys are illegally killed and shipped, the population seems to be at great risk. The Register of Chinese Herbal Medicine in the UK believes the practice is unethical and unnecessary in modern Chinese medicine. They suggest the consumption of alternatives such as beef, pork or chicken gelatine. Sustaining the ejiao industry seems impossible at this point and we must accelerate efforts to use alternatives such as plant based or artificially grown donkey based collagen if we want donkeys to remain on this planet. [The Guardian][By Anirudh Goel]

Dress for a Cause