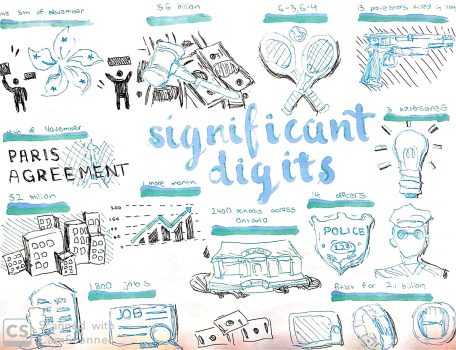 The 5th of November

Hundreds of protesters in Hong Kong took to the streets on November 5th wearing white Guy Fawkes masks to commemorate both Guy Fawkes Day and the one-month anniversary of Carrie Lam’s ban of the masks, the first invocation of colonial-era emergency powers in over 50 years. Protestors vandalized traffic lights and restaurants thought to be pro-Beijing as police fired water cannons into the crowds. Although fewer people are protesting now compared to the millions in June, the amount of violence and vandalism has increased; 3 people were in critical condition after a protest on Sunday. In response to the months of protests, China’s Communist Party has stated they will “perfect” a system for choosing a leader for Hong Kong, and not tolerate any “separatist behavior”. [Reuters] [By Janet Chen]

Negotiations have begun in Ottawa for a $6 billion proposed class action lawsuit which was originally filed in March on behalf of First Nations children affected by the on-reserve child welfare system between April 1991 and March 2019.  The settlement talks are currently in their preliminary stages, and are thus confidential. However, we do know that Ottawa plans to fight certification of the lawsuit, which alleges that Ottawa was aware about “severe inadequacies” in its on-reserve child welfare funding, policies, and practices, but did nothing to rectify these inadequacies. The proposed class action also calls for compensation for the First Nations children who “suffered or died” waiting for services Ottawa was legally required to provide based on Jordan’s Principle, a policy which puts the needs of First Nations children over jurisdictional disputes over funding. Carolyn Bennett, the Crown-Indigenous Relations Minister, has expressed her wishes that the negotiations are sorted as soon as possible, and that each child affected be adequately and fairly compensated. [CBC] [By Janet Chen]

This weekend, Denis Shapovalov, a 20-year old Canadian tennis player, had a shot to take the Rolex Paris Masters title from one of the best tennis players of our time, Novak Djokovic.  However, after the first set, it was evident that Shapovalov was outmatched, losing 6-3, 6-4. This is the 4th time that the two have played, with the Serbian consistently coming out on top.  This win gives Djokovic his 34th ATP Masters title and 5th Paris Masters title-a record in the sport. As the end of the season approaches, players look towards the Nitto ATP finals (playing November 10th through 17th) to see if the now 2nd ranked Djokovic will be able to pass 1st place Rafael Nadal. I myself am very excited to see what happens.  Stay tuned, as I’m sure you’ll be seeing a blurb about it in the upcoming weeks. [National Post] [David Walji]

Iraqi forces have shot dead at least thirteen protestors after weeks of restraint in favour of trying to stamp out demonstrations against political parties. After eight people were killed last Monday, security forces shot dead five more in the early hours of Tuesday morning. A protestor were killed and dozens injured when security forces opened fire on demonstrators blocking the entrance of the main Persian Gulf port of Umm Qasar, south of the city of Basra. More than two hundred and sixty protestors have been killed since the anti-government protests began early October in Baghdad and several other southern cities. The mass demonstrations have been met with harsh response from the security forces who have used tear gas, rubber bullets and live ammunition against the protestors. The demonstrations are due to long standing grievances over government corruption, lack of economic opportunity and poor governance. The demands have since expanded for sweeping changes and an overhaul of the country’s political system established after the US-led invasion in 2003. President Barham Salih has said that Prime Minister Adel Abdul Mahdi is willing to resign once political leaders agree on a replacement and has also called for a new election law.  Despite Iraq having the world’s fourth-largest oil reserves, the country is suffering from high unemployment and poor public services. One in five people live in poverty and youth unemployment stands at 25 percent according to the World Bank. The country is also the 12th most corrupt in the world according to Transparency International. [Al Jazeera] [Umar Yousafzai]

On November 4, the US began their process of withdrawing from the Paris Accord. The accord was agreed to in 2015 by 188 countries, including the US. Countries pledged to keep Earth’s temperature below 2 degrees celsius. However, the US government decided that the deal puts an “unfair economic burden” on the country, and president Trump decided to withdraw on the first day UN rules allowed. The US is one of the world’s biggest greenhouse gas emitters, which is a big concern for many environmentalists across the globe, as well as various world leaders, who are calling on Trump to take more responsibility in regards to climate change. Despite this move, the agreement is still set to continue, and if Trump doesn’t win the next election, the new leader may decide to rejoin the Paris accord. [BBC][By Cynthia Wang]

POTUS Trump has recently mediated a dispute between Egypt, Ethiopia, and Sudan over Ethiopia’s planned major dam. The $5 Billion Grand Ethiopian Renaissance Dam would greatly stimulate Ethiopia’s economy, and provide much-needed electricity to its enormous population. However, Egypt fears the dam would drastically disrupt the Nile, which is both Egypt and Sudan’s lifeline. The Nile provides 10 countries along its course with water and electricity. Naturally, both countries take this potential loss as an existential threat. The dam is scheduled to go online by 2022, but if tensions continue until then, the three adversaries may very well be drawn into armed conflict. To Trump’s credit, his position as international mediator seems welcome. [Al Jazeera][By Xingming Xu]

The US and China have delayed the trade deal signing again, this time to December, and not even in the United States. Trump’s trade war has been frustrating to both nations’ economies, and both sides have been attempting to sign a trade deal before the 2020 US elections come around. Washington has expressed “optimism that […] a comprehensive trade deal might come together this month”. Not the first time this has been said, and not the first time this result has slipped from their hands. US stocks slid on Wednesday as the news came out. [SMCP][By Xingming Xu]

Chilean prosecutors are seeking investigations of 14 police officers suspected of torturing protestors during the ongoing demonstrations. Chile is one of the most unequal countries in Latin America, despite being the wealthiest of those nations–a legacy of reckless neoliberalist policies enacted under brutal dictator Augusto Pinochet. The current demonstrations have become the most violent since Pinochet himself was in power, leading to at least 23 deaths, over 7000 detentions, and almost 2500 injured. While the 14 officers represent a small portion of rights abuses by authority, Chilean security forces in general have been linked to over 800 allegations of rape and beatings, as well as torture. President Sebastian Pinera has promised they, if found guilty, “would be prosecuted with the same force as rioters and looters”. [Reuters][By Xingming Xu]

A joint investigation between Global News, The Toronto Star, the Ryerson School of Journalism and Concordia University’s Institute for Investigative Journalism recently showed that 2400 schools across Ontario have exceeded the provincial legal level of lead in water – 5 ppb (parts per billion). This figure marks a 275% jump in schools that had exceeded provincial in the last 2 years. Although the hike is alarming, and reveals a bigger problem than the government originally thought they had on their hands, this is partially because laws on lead limits had recently been made much stricter. The bar was originally at 10 ppb , however, Health Canada announced that due to the severity of the effects of neurotoxins, particularly for a growing child, the bar was raised to 5 ppb. Regardless,if a third of schools across our province are violating lead limits, the government should stand up and take notice. [Global News] [By Anushka Tripathi]

This October, the Canadian job market missed employment predictions, with unemployment remaining at 5.5% and 1,800 less jobs. In fact, more than 16,000 full-time jobs were lost, though replaced by about 14,000 part-time jobs. However, experts believe that this may, in part, be due to the large hiring in the month of September and early October for the federal election. There is some good coming out of this though—it is likely temporary due to the abnormally strong job gains in the previous two months and may become the tipping point for the Bank of Canada to lower interest rates. [Financial Post][Bloomberg][By Catherine Zheng]

Fitbit,the popular fitness tracking company,is soon to join Google. Google announced early in November that it  will be purchasing the company for an astounding $2.1 billion. In the deal, Fitbit will be a part wholly of Google itself, a separate division of Alphabet, similar to the situation with Nest. Moving forward, this acquisition is a great way for Google to make strides in the wearables market where it previously tried numerous times to break in with its Wear OS platform but failed. The fitness tracking aspect could go hand in hand with Google’s existing Google Fit app. On the other hand, Google could integrate many of its software skills, mainly with the addition of future android platform wearable devices. Fitbit, now a sector of Google, could help the company open up to a whole new market and many updates for the already established product line could be expected in the coming years. [The Verge][By Anirudh Goel]