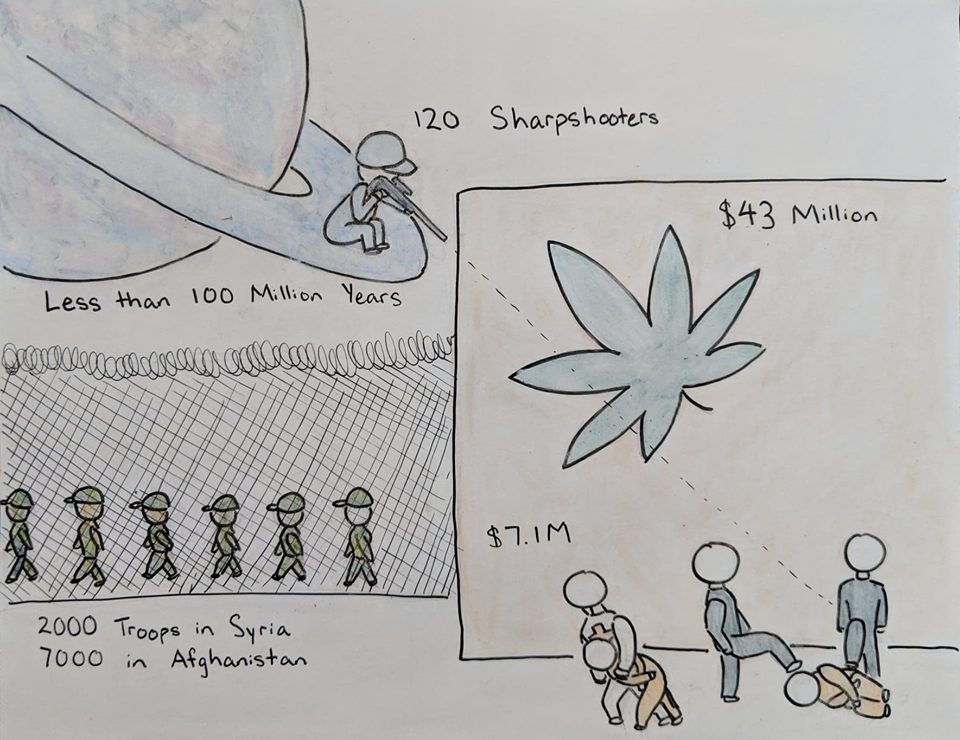 American President Donald Trump announced this week that he was withdrawing all 2000 US troops from Syria, as ISIS had been defeated there. This came as a massive surprise to US troops, who were in the midst of capturing the last major stronghold of a very much undefeated ISIS, and also to the USA’s international allies and local partners, who were blindsided by this sudden withdrawal. He seemed to be on a roll, however, as he then announced that he would be directing the Pentagon to withdraw approximately half of the 7000 US troops currently serving in Afghanistan. Defence Secretary James Mattis resigned over these moves, and Vladimir Putin was seen openly celebrating. Fun times we live in! [CNN]

Need to calm down after that? Well, you’re in luck! Statistics Canada has come out with a new report on everyone’s favourite subject, Marijuana Legalization! In the first two weeks after weed was legalized, Canadians spent over $43M on marijuana, causing massive supply shortages countrywide. Canadians are being advised by the government to purchase marijuana with cash if they intend to travel to the US, as they may be denied entry if their financial records show weed purchases.
[CBC]

As you’ve read in this column in recent weeks, Toronto has been undergoing a massive epidemic of gun violence in the last year. The Federal government has responded by allocating $6.7M to the city over five years for a new “Community Healing Project” to help tackle gang violence among Toronto’s youth. The program will include funding to pay 250 youth to work with those vulnerable to joining gangs. On top of this, the feds will also provide $400,000 for new community policing initiatives.
[CBC]

Think Toronto has a gun violence problem? We go next to the Brazilian city of Rio de Janeiro, where gun violence is a grim reality in the sprawling favelas that surround the city. It’s reached the point where newly elected governor Wilson Witzel, in cooperation with far-right president Jair Bolsonaro, has initiated plans to send 120 police sharpshooters with a “License to Kill” into the slums. The sharpshooters will work in pairs, with one to pull the trigger, and one to document the event to show the person actually deserved to die. Candidates for execution include anyone carrying a firearm, and though the measure is popular among the city’s inhabitants, serious human rights challenges have been raised.
[Bloomberg]

ISIS, Putin, and Killer Cops, Oh my! Is there anything that could increase the sense of impending dread that’s built up over this week? Yes, because according to a recent NASA report, Saturn is losing its rings. The beautiful clouds of ice and dust are falling into the planet’s atmosphere at an alarming rate, and the rings could be gone entirely in less than 100 million years! Quick, get a telescope, so you have something to tell your Great x 10^4,999,998th grandkids![EuroNews]