The MGCI galleria was bustling with students and teachers during lunch on Wednesday, 16 October 2019 as everyone gathered to purchase snacks from Garneau’s “Food Fiesta”. This food sale was organized by Clubs Coordinator Jessica Guo to give the school’s clubs an opportunity to fundraise money.

A few of Garneau’s clubs participated in this year’s “Food Fiesta” including Eco Team, The Reckoner, Gender and Sexuality Alliance (GSA), Debate Club, Muslim Students Association (MSA), Art Outreach Society, Culinary Club, Me to We, MGCI Key Club, MGCI Bridge Club, Filipino Culture Club, Orphan Sponsorship Club, Diplomacy Club, MGCI Biology Club, MGCI Toastmasters, and TedxYouth. All these clubs had a variety of food items available at their tables to suit the interests of students from all backgrounds. There were snacks like pizza, popcorn, bubble tea, and cakes available, but also unique cultural foods like gol guppay and kulfis. 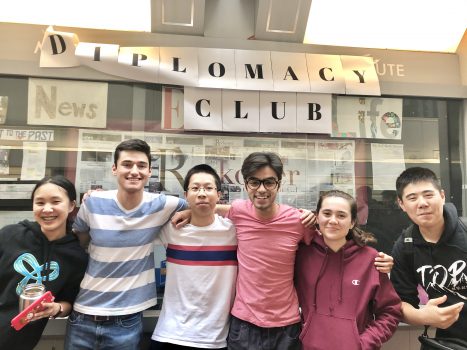 Previously known as the Unhealthy Food Sale, the event was rebranded this year to be called the Food Fiesta. Jessica Guo, Garneau’s Clubs Coordinator, stated that, “This change was an attempt to rebrand the event and remove the negative connotation that comes from calling it an unhealthy food sale.”

To register for the event, the club executives filled out an online google form emailed to them by the Clubs Coordinator and the tables were assigned on a first-come, first-serve basis. The Student Activity Council (SAC) had advertised the event with posters, announcements, and social media. Some clubs also advertised what they were going to sell on their social media pages prior to the event to attract buyers on the day of. All clubs came up with their own creative advertising and selling methods to raise more money which they can then spend on various club activities throughout the year.

The sale was deemed a success by students and club executives alike. “The sale this year was much better than last year. We got a very unexpected response from the students as we had introduced something new. We exceeded our goals by selling these gol guppays and kulfis and the students loved it,” said Sajda Zahir, vice president of MSA.

Most students also had a positive response toward the sale. Abdul Shafey Khan, a grade 12 student, said that, “This year the sale had many more food options to choose from than the years before.”

Despite this, most students felt that the event was too crowded and moving through the galleria was troublesome. It also posed a fire hazard and to resolve this issue, SAC plans to have all the clubs lined up against one side of the galleria in the future to allow for more space.

The next Food Fiesta will be held later on in the semester. The turnout for this sale was great and the improvements planned for the next one hope to increase this turnout of students even further. All in all, with the help of SAC and the efforts of the various clubs, the funds raised from the Food Fiesta will successfully assist in expanding and improving the activities the school clubs provide to the students of Marc Garneau.

MGCI at the HSJAs: A Force To Be Reckoned With

MGCI Apparel is Dazzling Despite Delays