The federal election is coming up on 21 October 2019, and candidates are campaigning across the country to become the future Members of Parliament (MPs). Public events are prime real estate for power-hungry candidates. On Wednesday, 2 October 2019, The Reckoner hosted a debate for candidates in the school’s vicinity. The debate took place at 6:00 pm in the library and was attended by students, parents, and members of the community.

Marc Garneau C.I. is located in the Don Valley West riding, which is separated from the Don Valley East riding by the western branch of the Don River. Since the school is essentially on the border of this region, not all students at Marc Garneau live in the same federal riding. Candidates from both ridings were invited to participate in the debate, four of whom were available. From the Don Valley East riding, Michael Thompson of the New Democratic Party (NDP) and Dan Turcotte of the Green Party attended the debate. The candidates from the Don Valley West riding were Ian Prittie of the People’s Party of Canada (PPC) and Rob Oliphant, the incumbent Liberal MP.

The Reckoner’s Editorial Board Manager Adil Haider was the primary organizer of the event and the moderator of the debate. After obtaining the school’s permission for the event, he reached out to candidates via email. A few student volunteers helped Adil to set up and clean up the library. Chairs were set up in rows facing two large tables which were set up for the candidates. 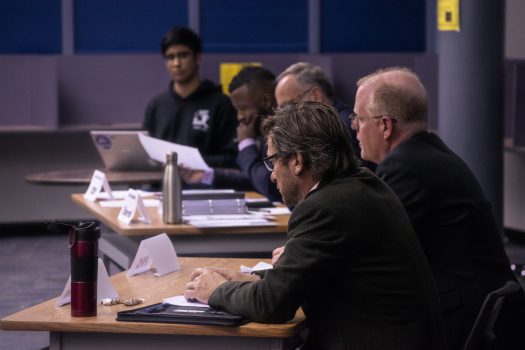 When asked about organizing the event, Adil said, “The main challenges we faced were lack of time and lack of prestige. Candidates didn’t take us seriously because we were a school newspaper, so we had to scramble to get our four candidates and were unable to get any Conservative representation.” He also noted that with more time they would have been able to better advertise the event.

Each candidate was given three minutes to present an opening statement, in which they introduced themselves and highlighted key points of their platforms. Following this, Adil asked the candidates several questions about what they plan to do if elected. Topics of discussion included the affordability of post-secondary education, addressing unemployment, gun safety laws, and combating climate change.

The moderated portion of the debate ended around 7:00 pm, after which the audience members had the opportunity to ask questions. Unfortunately, due to other debates occurring the same evening, The NDP candidate had to leave before the question period ended. To finish the evening, the candidates that remained were given a chance to give a closing statement to sum up their campaign.

Overall, Adil considered the event a success, saying, “we got the candidates to answer tough questions on their policies [and] gave community members an opportunity to be part of the democratic process.” Despite the setbacks faced, the event was able to run smoothly, giving candidates a chance to voice their platforms, and informing members of the MGCI community.

A Casual Afternoon Tea For The Graduates of 2015