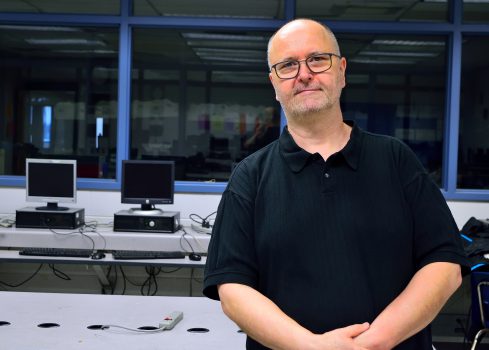 Q: What subjects do you teach at this school?

Q: How long have you taught at MGCI?

Q: Do you have any funny stories to share in class?

A: Nothing comes to mind just like that. A funny story? Nothing comes to mind. I wish I had more stories. Well, the TOPS end of semester party for computer science is quite fun. One time we played Christmas tunes and everybody brought out their instruments. That was a joy & TOPS kids really liked it.

Q: What did you do before you were a teacher?

A: I was a music composer. I composed for [studios] like TVO. I composed music for television. I did music for private producers. One is Sketches of Our Town. It’s kind of old but it was there for a long time. They did something like 200 shows. That kept me quite busy. I did a lot of work for TV Ontario. I [produced] work for CBC. I also had a studio where I used to write my own music composed albums for people. I did voiceovers. A voiceover is when you do narration for anything, audio, visual, film. I did voiceovers and studio work of different kinds for about 17 years. Different networks around Toronto, mostly Toronto based.

Q: What’s the best thing about teaching at MGCI?

A: The variety of students that we have. The diversification. It’s very diversified. [The] excellence. Some students never cease to amaze me. For instance [a student] went to Apple for a week. It was a surprise. Teams in computer science won at ECOO. Some are going to IOI. That’s astounding. Plus, girls teams that are making headway. Super exciting. I watch what everybody does. The energy is phenomenal. It’s just a lot of fun. I find the students cordial, amicable and just the energy is electrifying and really fun from the teacher standpoint to get involved in.

Q: Why did you decide to teach computer science/computer engineering?

A: I like to share information, share my knowledge. I like a steady job. For music composing you’re always freelancing. It’s feast or famine, sometimes it’s feast, sometimes it’s famine. With a family, I wanted something a little more steady. Teaching appealed to me. I have a love for electronics. There’s music, that’s my first love. Second love is electronics. I didn’t know at the time but computer science is something that involves all that, because I use computers to compose music. That’s how it kind of all fell into place. It was a career choice that I made and I decided to go into education.

Q: What is your favorite band?

Q: What is the most important thing you want students to take away from your classes?

A: Understanding how to learn autonomously. I teach them how to learn not from me but from themselves. That’s what I cherish the most and I’ve seen it in many many students. I plant a seed, I don’t spoon feed them, and they find information on their own. During my classes, we have an exchange of information between students. Specifically [in] computer science [it’s] very common. Students learn from each other. They are prepared to tackle anything outside the classroom, not having necessarily someone holding their hands. They can figure it out on their own. I like the term learning autonomously very much.

Q: What is your favorite food?

A: Wow, it’s the same as music. Chicken Pad Thai. It’s like music, you name it I like it. I’m not fond of snake or monkey head, I think I would draw the line there. But I basically like everything.

Q: What is your favorite pastime other than music?

Q: If you could give a piece of advice to a Garneau student, what would it be?

Home is Where the Heart is