Cancer changes the lives of over 200,000 Canadians every year and the Terry Fox Foundation is one of the many groups working towards creating “a world without cancer.” On 26 September 2019, students and teachers at Marc Garneau headed out for the annual Terry Fox Run to honour Canadian cancer activist Terry Fox and raise money for cancer research. The run took place during period two and the path took students through the community surrounding MGCI.

To accommodate the run, period two was adjusted to last two hours. This was so students could attend class and still participate in the event. The other periods were shortened to one hour to allow for this increase. Students were called to the gym by grade starting with Grade 9 and the rest of the grades were called in increments afterwards. Teacher Mr. Fox began each assembly with a short message about Terry Fox and the importance of the annual run. He then showed a video that touched on the life of Terry Fox, his dedication to raising awareness through his Marathon of Hope, and the legacy of the Terry Fox Foundation. After the assembly, students were led out to begin their run/walk around the community.

Homeroom teachers began collecting Toonies for Terry from students in the week prior to the Terry Fox Run. This money will go directly to the Terry Fox Foundation to support cancer research. Posters could be seen in the hallways around the school and announcements were made reminding students of the event.

A common issue from previous years was that students would try to sneak into the Tim Hortons along the route of the run. To prevent this, Vice Principals stood near the store and blocked wandering students. Most students seemed to enjoy the run and appreciate the cause. When asked how he felt about the event, Grade 12 student Zain Altaf said, “I think that the Terry Fox run is very beneficial for the school. Not only financially in terms of donating to cancer research but also to keep the message of Terry alive.” When asking younger students about the run and how it compared to previous Terry Fox events, Grade 9 student Angela Xu commented that: “The run was pretty fun, at our old school we just ran mostly on our field so it was nice to actually have a route to go on.” 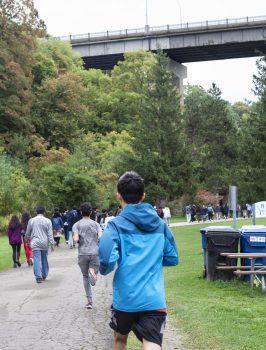 Overall, the Terry Fox Run was admired by students and teachers alike. Not only did people get the chance to explore the community and get some fresh air, but the event raises awareness of, and funding for cancer research. Teacher Mr. Alexander participated with his class and said, “Our school’s annual Terry Fox School Walk/Run is always a poignant moment, not just in terms of Terry’s own legacy but also in how it allows us to put our time, our energies, and our own bodies on the frontline, against cancer, on behalf of victims—visible and invisible—of this devastating disease. That steep descent at the beginning and the steeper climber at the end of our route mean a lot because they signify so much more.” Students and teachers were reminded of the impact that cancer has on people around the world and the event gave them the chance to bring the cure for cancer closer to reality.

Running for a Cure