Discovery of the year: each team’s best players control their respective offenses.

It should come as no surprise that NBA players like James Harden or Russell Westbrook can dictate the pace of the game through their volume scoring. When the defense adjusts, either by guarding them more closely or by setting up defensive traps and help, both point guards could punish any small mistake and set up a teammate for an easy basket.

In other words, the better a player plays, the more defensive attention he gets. Players often use this “gravity” as a signal to pass the ball. Westbrook facilitates the offense by forcing defenses to respect his scoring, while finding easy passes when they do.

A player like Stephen Curry, in contrast, facilitates in a different way.

Despite trailing Westbrook by a full four assists per game, Curry is arguably the better facilitator. Assists are a crude metric from an era when better ones didn’t exist. Since assists only count when a player makes a direct pass to a teammate, they don’t account for the space a player creates by simply being there, and benefits ball-dominant guards à la Westbrook much more.

Curry creates shots by soaking up defensive attention and opening floor space that his teammates can abuse, either through passes or by simply taking open shots. Even if Curry isn’t directly involved in the play, he misdirects a defense’s focus, guiding it towards him rather than the play at hand.

<iframe src="https://reckoner-gravity-score.herokuapp.com/curry.html" width="100%" height="500px" frameborder="0" scrolling="no" align="middle"></iframe>
<iframe src="https://reckoner-gravity-score.herokuapp.com/westbrook.html" width="100%" height="500px" frameborder="0" scrolling="no" align="middle"></iframe>
The graphs above highlight the performance of Curry and Westbrook’s teammates when each point guard is on or off the court. The usage rate conveys how often the play ends with a specific player, while the effective field goal percentage (eFG%) reveals how well each player shoots.

A good facilitator should naturally make his teammates better when they are on the court. For both Westbrook and Curry, we expect each of their teammate’s eFG% to decrease when the two point guards are off the court. While this is true for Curry, the opposite occurs for Westbrook. Westbrook makes his teammates better by not playing. His four assist lead over Curry is essentially a moot point.

Clearly, a player can do more than just score to make his teammates better. In that regard, even Draymond Green is a better facilitator than Russell Westbrook.

Assists don’t tell the story of how a team is benefitting from a player’s presence. Open shots, effective field goal percentage, and close defender frequencies do.

But what happens when Curry isn’t catching fire from beyond the arc? In games where he’s only scoring ten points, does his gravity disappear with his shooting stroke? Or is the threat of his three-pointers frightening enough to warrant the same attention?

In a nutshell, it’s a bit of both.

Gravity is a somewhat polarizing stat since there is so much variability in the defense’s movement. Is a defender’s movements really a product of gravity? The calculation algorithm is a bit finicky and it doesn’t accurately depict a player’s impact on his teammates, only that a defender is, say, a few centimetres closer than usual. The stat is generally riddled with uncertainty.

A simpler approach would just be to create a score based on eFG%, wide open shots, and closest defender frequency. And that’s exactly what we did. Introducing The Reckoner’s Gravity Score. 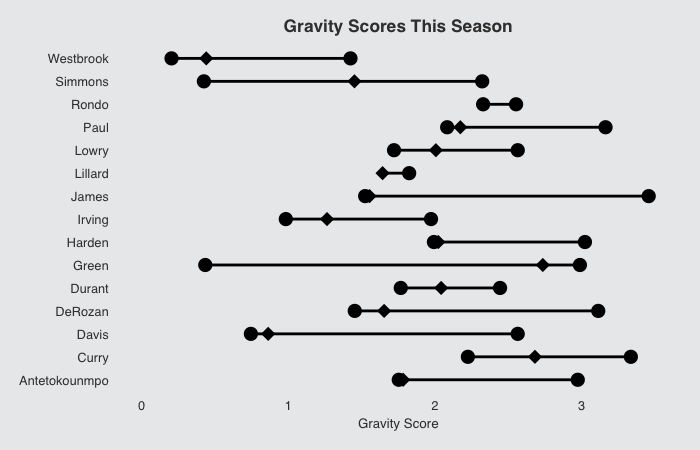 The Gravity Score relies solely on how well the team is playing when each player is on the court. A high Gravity Score essentially means that a ton of open opportunities are being created for a player’s teammates when said player plays. We decided to plot both the NBA scoring and assist leaders to find out just how much impact they have on their offense.

It’s interesting to note that, for most players, the Gravity Score is heavily correlated with how much each player is scoring. The diamond-shaped marker, which denotes the Gravity Score for each player’s lowest scoring game, is mostly found in the lower half of the score range. This makes sense, since players on an off night will not require the same defensive attention from an opposing team.

Surprisingly, Draymond Green trends in the complete opposite direction. His lowest scoring games constitutes those where he has had the most impact. Clearly, a player can do more than just score to make his teammates better. In that regard, even Draymond Green is a better facilitator than Russell Westbrook.

Notice how Westbrook lags behind most other players in terms of gravity. His presence does not make his teammates even marginally better on the court. Even in his highest scoring games, Westbrook’s Gravity Score trails Raptors star DeMar DeRozan which, admittedly, is only true for this year. The evolution of DeRozan is highlighted here. On his best nights, he creates shots for his teammates at an equal or greater rate than Rockets duo James Harden and Chris Paul, a vast improvement over last year, where his greatest Gravity Score was a mere 1.7. 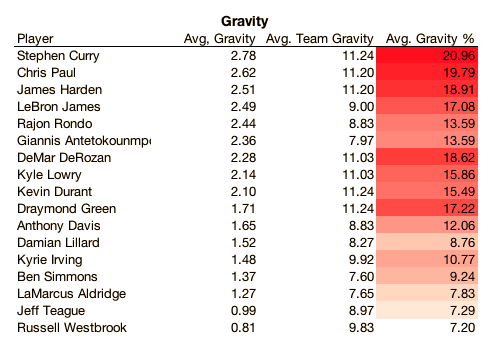 While it is true that the Gravity Score can easily be influenced by how good your teammates are, not even Westbrook can complain about having a bad team this year.

Within the confines of the list, Westbrook’s Oklahoma City Thunder have a collective Gravity Score of 9.8, similar to the eastern powerhouse Boston Celtics, while also leading the Cleveland Cavaliers, the Minnesota Timberwolves, the Philadelphia 76ers, as well as the New Orleans Pelicans, each by a significant margin. Westbrook also contributes the lowest percentage of gravity to his team’s starting 5, with a mere 7.2%. His teammate, Paul George, by comparison, contributes 29.5%. If Paul George and Ben Simmons can make their teammates better, Westbrook has no excuse.

It’s simple to explain if you watch both Westbrook and Curry play. Westbrook is often reluctant to move off the ball. The Thunder’s offense revolves around a series of isolation plays for their three stars.

When Paul George (number 13) has the ball, for example, Westbrook (number 0) often clears out of the way, opting to stand pat at the half-court line. That’s not to say the Westbrook doesn’t have gravity. He clearly does, as teams respect his scoring ability. But imagine Westbrook as a strong magnet. Now place that magnet two hundred kilometres away from the target. Will the magnet pull the target closer? No, it won’t.

Westbrook’s movement without the ball is night and day when compared to Stephen Curry’s.

Curry (number 30), on any isolation play, instead takes an active role in the offense. Every second, he’s calling for a different offscreen. Since the defense has to track Curry’s position at all times, it takes attention away from the actual play and directs the defense’s focus onto him. This way, both the defender and his teammates are distracted, making it a true isolation play. 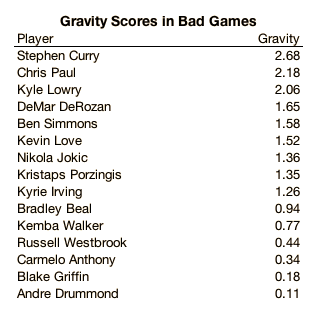 What also caught our eye with the Gravity Score is how we can compare scores during bad games. By utilizing an outlier-determining method, we could plot out an average gravity over the stretch of games where performance was below expectations. Note that some players (LeBron James, for example) aren’t listed simply because they are consistent enough that none of their point totals can be considered outliers.

The results shouldn’t be surprising. In games where a star scorer doesn’t score (Kemba Walker, Blake Griffin), his gravity is generally low. In comparison to a facilitator (Simmons), a skilled passing big man (Nikola Jokic), or even a sharpshooter (Kevin Love), these players provide more value even when they’re not scoring because the threat of a pass and the threat of shot space is more threatening than the threat of isolation baskets.

The only outlier, in this case, is probably DeRozan, who is making a conscious effort to draw his isolation defenders to one side while eying a pass to another. DeRozan is also benefiting from excellent teammates and his improved ability and greater tendency to pass this year has taken his impact to another level.

The Gravity Score shows that not all assists are equal in terms of impact. Facilitation of an offense involves more than just mindless passing. It’s about putting your teammates in space so that they can score, so that they have the time and shot space to succeed.

The real discovery of the year? Meaningful movement and purposeful passes dictate the offense.

Charts by Varun Venkataramanan. All stats updated following the conclusion of the regular season.

“Never lucky” – Julien’s favourite catchphrase when things don’t go his way. You can probably guess that writing these post-deadline biographies and articles are all a product of bad luck. Because they are—duh. Currently at The Reckoner, he is the Deputy Editor-in-Chief and Editorial Manager. When he’s not scrambling to finish his late assignments, Julien can often be found cheering for the Vancouver Canucks to win the draft lottery, browsing subreddits for social experiment ideas, or witnessing another epic Fnatic comeback.