As teenagers, most of our day is spent at school, meaning we don’t get many opportunities to earn extra money or experience the real world. The Third Annual Youth Career and Job Fair was held on Wednesday, 24 April 2019 at St. Clement of Ohrid Macedonian Orthodox Church from 4:00 pm to 6:00 pm. It was hosted by Rob Oliphant, the Member of Parliament of the Don Valley West riding, and aimed to provide community youth with more resources when looking for jobs.

The event welcomed anyone between the ages of fifteen and thirty, and received a great turnout of approximately four hundred people, mainly MGCI students. Representatives from over forty-five companies such as Sunnybrook Hospital, CIBC, Toronto Police Unit, law firms, and TNO, had booths to promote placements at their organizations. To aid the smooth flow of the fair, a site map was provided and volunteers were present to guide the attendees if needed. Andrew Fricker, one of the volunteers who helped organize the event, was impressed by the variety of employers, saying, “There are a lot of employers and I am glad there are so many opportunities for teenagers to explore different careers at this fair.” 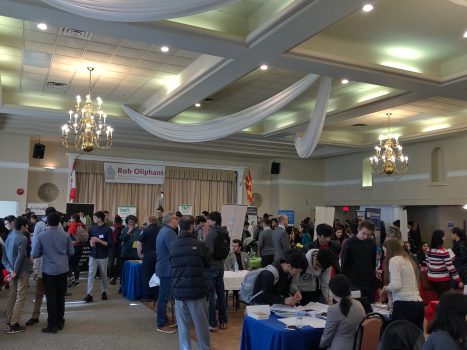 Attendees at different booths at the Jobs Fair. Photo by Evan Woo.

Aside from offering employment opportunities, some booths offered services to assist youth with enhancing skills like resume building and delivering interviews. These booths also interviewed attendees and distributed job application sheets and contact information that they deemed suitable for their skill set. There were also booths set up by educational institutions like George Brown College, which informed attendees about post-secondary options available to them. To encourage a professional atmosphere, the attendees were advised to dress formally, have their resumes ready, and be prepared to give interviews.

Rob Oliphant and staff, along with a group of sixty-five volunteers, were involved in helping organize the fair and clean up the venue. Prior to the event, advertising was done through various social media platforms, such as Instagram, Twitter, and Snapchat. This likely led to the large turnout, but attendee and Grade 11 student Elmirah Ahmad thought “the place was a bit overcrowded.” However, despite the crowding, she thought the fair was helpful and “better than expected.” People who were interested in the event had the choice of either registering on Rob Oliphant’s website or at the venue the day of. 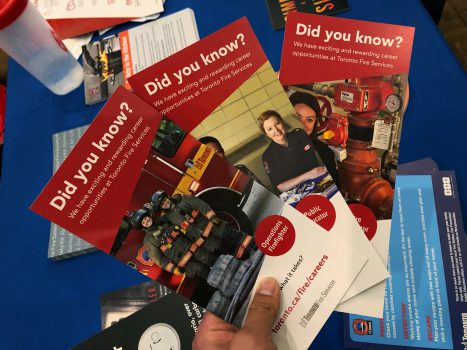 Information sheets handed out to attendees by different organizations. Photo by Evan Woo.

The number of volunteers and the amount of planning that went into the event ensured a smooth flow. Rob was pleased with the event and thought it achieved the goals he had in mind. He spoke about why he founded the fair three years ago when he noticed how many youths struggled with finding jobs. “[Youth] always looked in the same places and didn’t have enough knowledge when it came to job searching. I wanted to expose kids to more opportunities and give them an idea about everything that is available out there,” he said. In the future, Rob hopes to see even more students attend the fair. He believes this could be done by “convincing more students it’s worthwhile to come. Even if you already have a summer job, it is always a good idea to build your network.”

Overall the Jobs Fair was a successful event and enjoyed by all. The youth got a chance to inform themselves about the job opportunities available for them and connect with employers, while the employers had the opportunity to recruit a diverse range of youth. This year’s Annual Youth Career and Jobs Fair has been one of the biggest and most beneficial Fair so far and is expected to do even better next year.