On June 2007, the Toronto Transit Commission (TTC) rolled out the revolutionary proposal of Presto card. With Presto, the world was to become a paradise without fare evasion. The TTC dreamed—Toronto dreamed too—that these investments would solve the TTC’s spending deficit and lower its sky-high fares. Yet, instead of following in the footsteps of successful transit systems in Asia or Europe, the TTC just couldn’t resist spending an extra billion dollars to add their own flair, a flair that simply doesn’t work. (1) Torontonians now suffer from the consequences of broken down gates, incomplete coverage, and simple design flaws.

Presto gates are well known for their visually appealing but flimsy design, making them prone to both mechanical and electronic errors. Travellers thoroughly enjoy the two-second delay between tapping their cards before the door opens, offering them the unique opportunity of slamming into gates. However, the TTC did not make their delicate motors up to the task, causing the gates to go out of commision and then requiring hefty amounts to repair. These damages could have been mitigated if doors for entering and exiting were separated, but the all-mighty designers of Presto decreed that entrances and exits must use the same door—after all, how else would travellers crash into each other and create a cacophony? 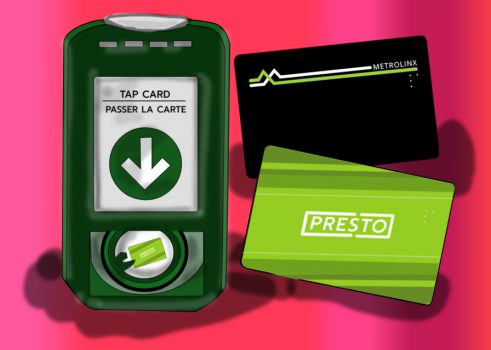 The mediocre software from Metrolinx provides further annoyance. The programs for monitoring registered cards, payment of fare and status of Presto gates were all loaded onto the same software, causing the system unnecessary amounts of stress. As a result, the 1.8 million pesky daily travellers never fail to overload the system during rush hour. (2) Common malfunctions include gates refusing to open, not accepting loaded cards, or showing a big red ‘X’. This would have been acceptable if it was immediately addressed by the TTC when it was first discovered in 2016. (3l )Instead, following Torontonian traditions, progressive changes to government run organizations must be delayed for at least two years, no matter the daily disruptions and resulting public annoyances.

Previously, transfers could be used for the whole day due to lack of time markings, and riders abused this power to the best of their abilities. Presto set out to tackle this issue by using electronic data to keep track of transfers, but it failed miserably. The TTC made the faulty assumption that riders would bother to pay at all, and only under those conditions could the new transfers be applied properly. With the arrival of Presto gates in subway stations, and most gatekeepers removed, riders received the perfect opportunity to demonstrate their creativity in fare evasion— be it by charging through gates after they are opened by another person, jumping over the Presto gate that has a grand height of 110 centimeters, or triggering the infrared sensors with an umbrella. (4) Sometimes the TTC don’t offer people a choice – major subway stations no longer have full support for tickets and tokens; it often becomes necessary to walk several hundred metres just to find the entrance that allows payment without Presto card. With the faulty planning and bias against non-presto riders, not a single fare evader is encouraged to become an honest, law-abiding rider.

The Presto card is notoriously unreliable and fails to achieve the goals TTC aimed to achieve. Being often out of service is an economic burden and presents a major source of frustration during rush hour. This along with other inconveniences allows those who are inconvenienced to skip fares.The Presto card is a beautiful and well-intentioned system designed to renew the old infrastructure in the TTC, but now it has become a victim of TTC’s terrible implementation.

Conner Lee is a writer for the editorial board, and finds joy in making sure everybody knows he's right. He's an enjoyable person to hang out with and will tell you his cringe worthy jokes that don't really relate to the discussion. This year Conner aims to stop procrastinating and finish his -

Op-Ed: A Need for Change – The Legal System and Sexual Assault