Voices of Change: Students Speak Up at LC1 Meeting

Equality, standardized tests, and E-Learning–these were just a few of the many topics that underwent intense discussion at the LC1 meeting held at Marc Garneau CI on 19 March 2019. Organized by the Toronto District School Board (TDSB) Student Senate, these monthly meetings are open to all sixty-six thousand students of the schools in the Learning Centre 1 Area, including those attending MGCI.  The meeting gave students the opportunity to generate thoughtful and impactful discussions regarding relevant issues surrounding the TDSB. Any ideas and suggestions made are brought to the executives of the Student Senate during the meeting are later brought to the executives of the Student Senate and the TDSB. “I thought that it was an incredibly eye-opening and beneficial experience. As a new student to the TDSB, it was the perfect opportunity to meet like-minded students from across the board,” said Ave Thomson, a Grade 9 student at Marc Garneau CI.

The meeting was chaired by Celine Chung, a Grade 11 student from York Mills CI, and Evan Woo, a Grade 9 student from Marc Garneau who was pivotal to bringing the event to the school. “We want to hear new voices and opinions at all our meetings, and it has been over two years since an LC1 meeting has been held at MGCI,” he explained. Once it was decided that the session would be hosted at Garneau, it was advertised on the Student Senate’s Facebook and Instagram pages and the morning announcements. Fifteen Garneau students attended  as well as thirteen other students from Monarch Park CI, Etobicoke CI, York Mills CI, Northern Secondary School, Earl Haig Secondary School and Leaside High School.

The two-hour session kicked off at around 5:00 pm with introductions, and then progressed into discussions about relevant topics presented by the chairs, where attendees could voice their opinions and propose possible solutions to the issues.

The first topic concerned a recent survey that looked at the guidance and career planning resources available to students, as well as student performance on standardized tests. The survey showed that Ontario is falling behind when it comes to preparing students for the workplace, and also highlighted the difference in the academic performance of students in the applied stream as opposed to those in the academic stream. 88% of academic stream students graduate each year, as opposed to only 59% of applied stream students, and only 37% of applied stream students go on to college.  It was pointed out that teachers often hold lower expectations for applied students, limiting their potential to learn and gain more from their courses. There was a general consensus among attendees that these students are clearly held at a disadvantage, and this opinion was supported by statistics that showed lower achievement in mathematics and the OSSLT among applied students–90% of academic students pass the OSSLT on their first try, while only 39% of applied students do the same. The Grade 9 Enhanced Pathways Academic Program, which merges academic and applied streams into a single academic-level course, was brought up and soon developed into a topic of intense debate, as many students had conflicting opinions about it. There were both applied and academic stream students present at the meeting, so many different perspectives were presented. Some stressed the importance of equality among students, stating that both applied and academic students deserved the same education. Others placed a greater emphasis on meeting the needs of applied students, saying that that placing them in an academic level course would only have a negative impact on their learning. The discussion produced several interesting solutions, such as merging the two streams in Grade 10 rather than Grade 9, which would give applied students more time to work with teachers and prepare for the harder academic level courses. 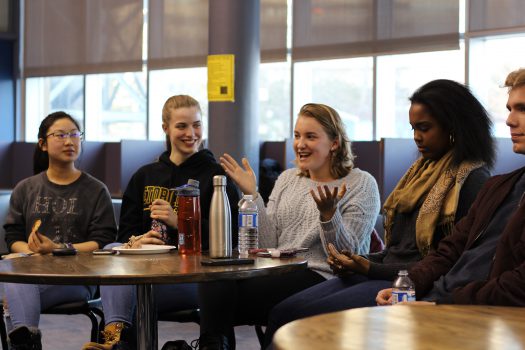 Students were then given a chance to voice their opinions on the Grade 9 EQAO, a standardized, province-wide math test. Some students felt that it was unfair that the test, which is meant to assess the performance of teachers and schools, can account for up to 10% of students’ final math grades. Others defended the benefits of standardized tests and pointed out that without an incentive for students to do well on the test, the results can not be seen as accurate.

Following the two discussions, there was a twenty minute dinner break, during which pizza was served and students had the chance to socialize with each other. The break was followed by a thirty-minute session called “What’s your beef?”, where students could bring up any issues that they observed, ranging from the lack of heating in some classrooms to the discrimination against minorities in schools. A Garneau student complained about the fact that MGCI’s funding had been cut in half due to it being an “underperforming” school, despite it being one of the most populated schools in the TDSB. Students also voiced concerns about overcrowding, and how it affected course selections, saying that many students couldn’t take courses they wanted to because of the shortage of available spots. 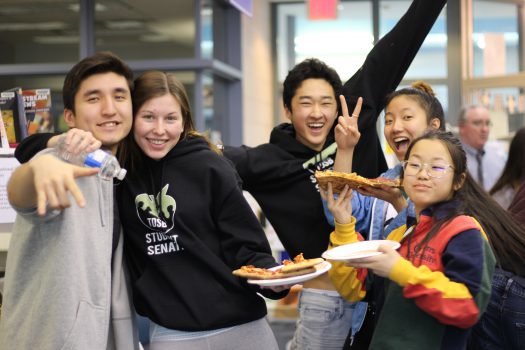 Following the discussions there was a dinner break where pizza was served and students had the chance to socialize with each other. Image: Evan Woo

The topic of E-Learning was, by far, the most hotly discussed topic of the session, with many expressing irritation over the Ontario Government’s proposition to require students to take at least four  E-Learning courses during their highschool years. There was a lot of skepticism about who would be teaching the courses, what online platforms they would be taught through, and how taking the courses might affect university applications, with the general consensus being that a lot more thought needs to be put into the idea before it can even be considered.

Overall, the meeting was viewed as a huge success, as a result of the high turnout and an outstanding level of engagement among the attendees. “The discussion was very good, which just goes to show how important it is that the student voice is heard,” commented Nick Rowe, the vice-principal of Etobicoke CI and one of the staff advisors of the meeting. Students walked away from the meeting with similar thoughts.  As Ave stated, “It really made me think about issues in our education system and understand what we [students] can do to improve it, leaving me with a feeling of empowerment and a desire to make a change.”

Evelyn is the Photography Manager at The Reckoner. Her notable talents include starting assignments at 12 am and sleeping through all of her alarms. She aspires to one day be 5’3 and achieve a first-grade level of fluency in Mandarin.

A Dress to Change

Students and Teachers Hit the Ice