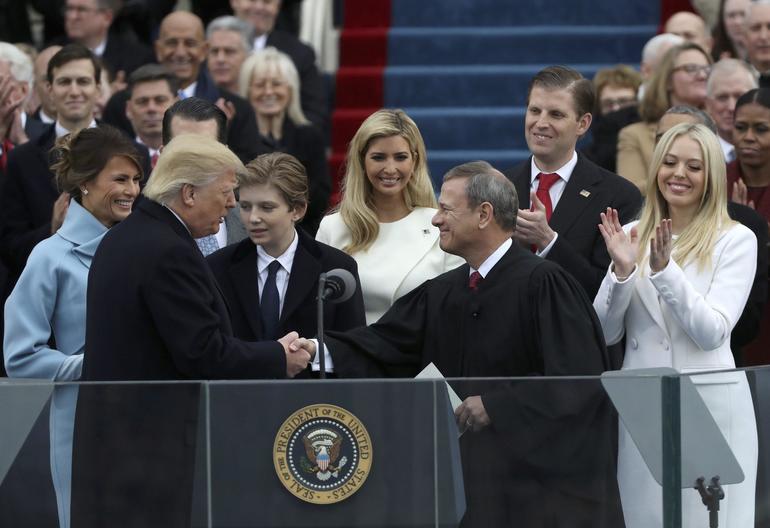 Donald Trump, surrounded by family, is sworn in as President of the United States by U.S. Supreme Court Chief Justice John Roberts. (Image courtesy of Reuters)

On 20 January 2017, Donald Trump became the 45th President of the United States in Washington D.C. President Trump’s inauguration marked the shift of presidential power from Barack Obama and the Democratic Party to the Republican Party. The oath of office, took place at Capitol Hill following tea with outgoing President Barack Obama and his wife, Michelle Obama. The inauguration was attended by many, including the Obama family, Trump’s family, supporters, and protesters, and culminated in an address to the crowd by Trump. However, it was boycotted by at least 60 Democratic Representatives, an initiative led by Representative John Lewis. 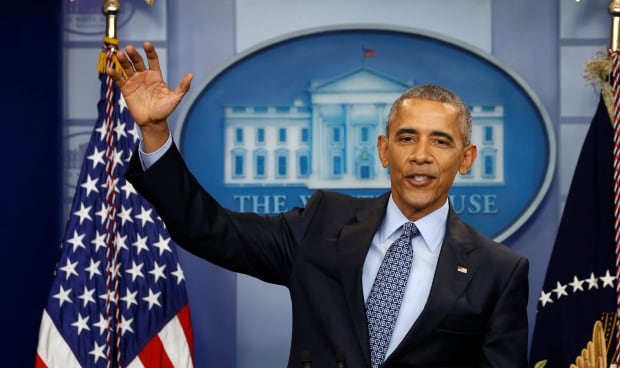 As his last major act as president, American President Barack Obama commuted the sentences of 330 federal inmates serving time for drug offences. Well-behaved and non-violent drug offenders who have already served 10 years (though there were exceptions) could apply for commutation, and the applications, that numbered upwards of 16 000, were all personally reviewed by the president himself. Obama had long campaigned for more lenient sentences for low-risk drug offenders. During his time as president, he has commuted more than 1 715 sentences—more than any other president in U.S. history.

An avalanche led to the fall of tonnes of debris and snow onto the luxury resort in Italy. (Image courtesy of ANSA/Associated Press)

On the morning of 18 January 2017, an avalanche buried the luxury Italian mountain hotel, Hotel Rigopiano, under tonnes of snow and debris. At the time of writing, 4 bodies have been found, with 10 people rescued but dozens still missing. Rescue workers, Italian military, and sniffer dogs continue to search for survivors. At 4:30 am local time, the first rescuers, who had to ski through a blizzard to reach the hotel, arrived. Emergency helicopters were later sent in. The avalanche was the result of 4 earthquakes, all with magnitudes above 5, that had hit central Italy hours prior. More earthquakes remain a possibility.

This image released by Universal Pictures shows Dennis Quaid with a dog, voiced by Josh Gad, in a scene from “A Dog’s Purpose.” (Image courtesy of Joe Lederer)

The premier of “A Dog’s Purpose,” a heart-warming film for animal lovers around the world, was cancelled this past week after a controversial video was posted by TMZ. The video was of Hercules, a German shepherd, being forced into rapid waters to film a scene in the movie. After viewing the clip, PETA called for a boycott of the film. Amblin Entertainment and Universal Studios have issued a joint statement to Variety, saying that they are reviewing the incident. The companies hope to assure their audience that Hercules is in good condition.

Protestors in Washington D.C. during the Women’s March. (Image courtesy of Seth Michaels)

On 21 January 2017, over 500 000 people attended the Women’s March on Washington to show their support for women’s rights. Those who participated said that the protest was much more peaceful and positive compared to the protests during Friday’s Presidential inauguration. Many people traveled from other states, and even other countries, to attend the march. Apart from women’s rights, awareness for a variety of other issues was raised. Participants also marched for LGBTQI, disability, and racial rights. In support of this event, an estimated 400 000 marched in New York City, 250 000 marched in Chicago, 100 000 marched in Los Angeles, and more than 90 000 in St. Paul. A similar march was also held in Toronto, as well as other cities around the world.

Running for a Cure